Daily Kos Purge of the Crazies

Today I did something I’ve never done before (not even during the Fraudster mess), and wish I’d never had to do.

I made a mass banning of people perpetuating a series of bizarre, off-the-wall, unsupported and frankly embarassing conspiracy theories.

I have a high tolerance level for material I deem appropriate for this site, but one thing I REFUSE to allow is bullshit conspiracy theories. You know the ones — Bush and Blair conspired to bomb London in order to take the heat off their respective political problems. I can’t imagine what f—ing world these people live in, but it sure ain’t the Reality Based Community.

So I banned these people, and those that have been recommending diaries like it. And I will continue to do so until the purge is complete, and make no mistake — this is a purge.

In an update to the post, he notes that he has reinstated some of the people after correspondence but that he trusts the message has been sent.

Still, I applaud the move. Frankly, I seldom read Kos’ site these days because it is so over-the-top in its vitriol.

It wasn’t always so. When I first started OTB in early 2003, Kos’ was one of the few sites on the Left side of the Blogosphere that I read regularly. I was a even a contributor for some time to Political State Report, Kos’ offshoot site dedicated to chronicling politics at the state and local level. While I seldom agreed with Kos, his analysis was worth considering. And his collection of polling data alone was worth regular visits to the site.

Somewhere during the runup to the 2004 election, though, the site took a turn into decidedly more ranting style. This was partly because other contributors were added to the mix but partly, too, a change in Kos’ own style.

Now, granted, Kos’ site exploded in popularity during this same period. There’s obviously a market for a gathering place for spleen venting. Daily Kos is far more popular than sites like Kevin Drum’s Political Animal or Matthew Yglesias’ eponymous blog. Still, I hope Daily Kos returns to being a site that’s readable by the other side in something other than the way Ted Rall is readable by the other side.

The purge of the crazies is a huge start. A recognition that those who disagree with us can be wrong without being evil is something from which the Blogosphere, and the American polity in general, could benefit.

Comments on Blogs: Left vs. Right 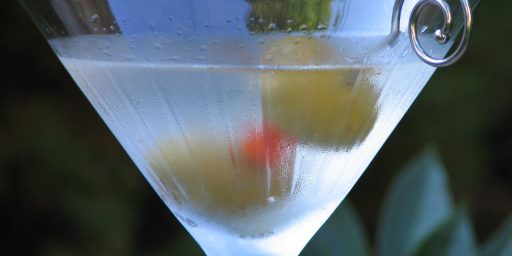