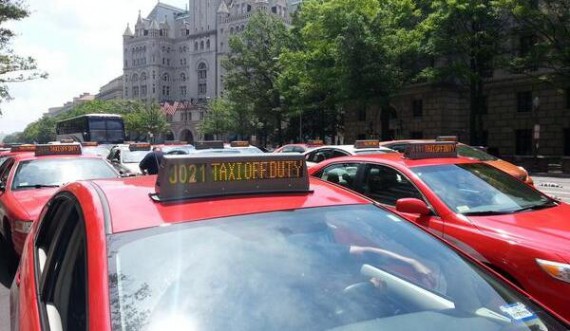 D.C. cab drivers blared their horns and blocked traffic for blocks near the city’s municipal office building Wednesday to protest rideshare companies like Lyft and Uber.

The companies are app-based, and customers use smartphones to “hail” drivers who use their own personal vehicles for pickup. They do not operate under the same city regulations that govern taxis..

The D.C. Taxi Drivers “Teamsters” union issued a press release Wednesday claiming that the rideshare companies “are operating illegally in the city and are stealing work from D.C. taxi drivers.”

As part of the protest, the president of Local 922 delivered a letter to D.C. Mayor Vincent Gray and city councilmembers demanding that the city follow Virginia’s example and order the companies to cease operations until a fair regulation resolution is reached.

“It’s ironic that taxi companies have congregated on Freedom Plaza, when they refuse to accept the freedom of choice, flexibility and economic opportunity that the Uber platform provides thousands of partners and riders across the city,” Uber wrote in a statement about the protest.

While it might surprise regular readers, I’m quite sympathetic to the cabbies on this one.

I’ve never used Lyft or Uber, but have heard great things about their service. Further, while I haven’t used one since starting my current job last August, I’ve been a frequent customer of DC taxis and find them appallingly bad. They’re by far the worst-quality fleet of vehicles of any cabs I’ve ever utilized, and I’ve been in taxis in the Third World. And my natural instincts are to side with the free market, which again tilts against the cabbies here.

But the fact of the matter is that the “ride share” services are operating a taxi service in DC in illegal competition with those who are playing by the established rules. While I think the whole notion of a city-mandated scarcity of cabs for the purposes of establishing a monopoly is generally a bad thing, that’s the current system and those driving legal cabs in DC paid a lot of money to be able to do so. It’s not right that they should have to compete for fares against people without that sunk cost.

It’s similar to my position on the efforts by brick and mortar restaurants to ban food trucks, which I wrote about several years ago:

I’m not a fan of rent seeking of this sort but can at least understand why tax paying restaurateurs would organize against competitors who are given relatively preferential treatment by the state. It would seem, though, that the construction of this law is too broad. Why not simply require comparable licensing for “permanent” mobile establishments and stationary restaurants? Or restrict the application of the law as currently written only to trucks operating within, say, a half mile of a fixed facility?

If services like Lyft and Uber are here to stay, I’m all for incorporating them into the system. But they should have to pay the same sort of taxes as other business operating in a city and play by the same rules as more traditional taxi companies. I’m happy to see such absurdities as New York’s medallion system, where would-be cab operators have to pay as much as $965,000 for the privilege, go away. But if it’s going to, those who’ve paid ought to get a prorated refund or otherwise made whole.