DC Has Worst Drivers But Safe For Pedestrians

The nation's capital is the worst place to drive in the country. But it's a surprisingly safe place to walk.

The nation’s capital is the worst place to drive in the country. But it’s a surprisingly safe place to walk.

Atlantic Wire (“Though D.C. Has the Worst Drivers, It’s Pretty Safe to Walk There“):

Washington D.C. has notoriously bad motorists. But, for a metro area consistently at the top of annual “worst” drivers surveys, it ranks lower in a pedestrian fatality study than one might presume. Meaning, commuters may be failing to understand basic road etiquette, but they aren’t necessarily taking out as many pedestrians while they’re doing so.

When we asked Transportation For America communications director David Goldberg about D.C.’s ranking in the fatalities study, he remarked that the city had invested in larger sidewalks, signalized crossing and marked pedestrian crossings. The metro area has “more pedestrian safety infrastructure than a lot of other places,” he figured. Which could be an additional reason why D.C. pedestrians are able to shield themselves from D.C.’s poor drivers.

Additionally, the roads are gridlocked from 7 in the morning until 9 in the evening, making it nearly impossible to achieve ramming speed. 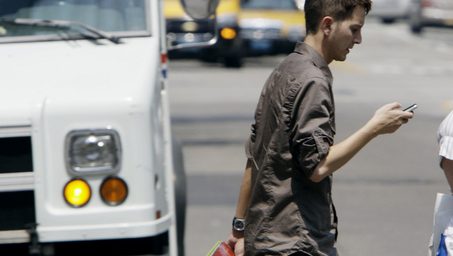