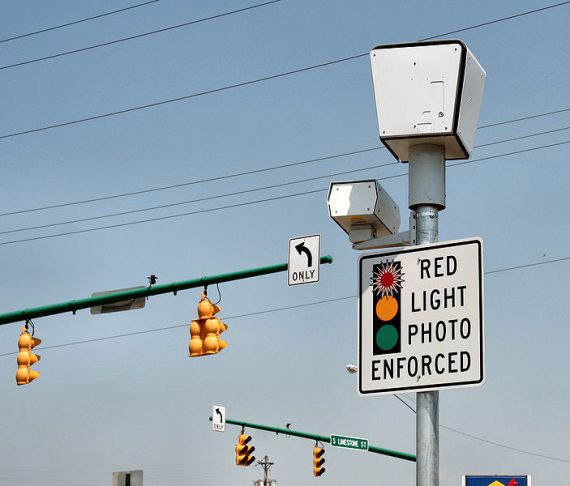 In Washington, the default speed limit is 25 miles an hour, meaning that any time the city decides it wants to rustle up some extra cash — or perhaps just because it has prostate problems and is feeling grumpy — it simply has to set up a speed camera on a street on which no sane person would go as slow as 25 miles an hour. One example would be the wide stretch of Michigan Avenue NE on which John was popped. Another would be the six-lane highway that is M Street SE, on which I was recently zinged multiple times on successive days, for $125 each, until the snail mail started catching up with the tickets and I discovered I had a serious problem.

This sounds a lot like municipal extortion, doesn’t it?

I do not use the term “extortion” lightly, but, being a responsible journalist, I am going to give the city a chance to defend its system. So here is an official response from the mayor of Washington: “You shut up about this or we will break your thumbs.”

Possibly you are thinking that even though a machine-driven system is cold and unyielding, once you get into court and actual human people take over, things become much more reasonable.

At this moment, John and I are being addressed by a hearing examiner who is reading robotically from a computer screen. She is telling us that, unlike a person — say, a police officer — a speed camera is presumed to be inviolate and infallible as long as its accuracy has been certified by a radar technician. You may not challenge it, she said: You will get off only if you can establish that you personally were not driving the car because, say, it was stolen. (By this logic, if the camera said you were traveling at twice the speed of sound, you’d have to dummy up and pay the fine.) I feel John shudder beside me.

But then he begins to speak. He doesn’t deny he was driving the car, or even that he wasn’t — by the city’s ridiculously low speed limit — “speeding.” But, unlike the other defendants in the room, John has a thick dossier in front of him. It contains records of his attempts, online, to subpoena from the D.C. police arcane documents tangentially related to his case — including a year’s worth of maintenance records on the radar machine that nailed him, a copy of the contract between the city and the company that services the radar, including “all attachments and exhibits thereto,” etc. It’s all nuts, but it’s also his legal right to see this stuff. And the city never responded to his requests.

This troubles the hearing examiner. She doesn’t seem to understand simple common-sense arguments related to humans acting in reasonable fashion, but paper — paper seems to rule. Paper was requested, and the city didn’t supply it in a timely fashion! Case …dismissed!

The District operates parking enforcement the same way. Long stretches of curb are unmarked with signs. Cars park there, often by the dozen. Said cars are ticketed for violating zoning restrictions not obvious to someone looking at the parking meters. There is no meaningful system of appeal.

This is the stuff of Third World countries. And the capitol of the world’s greatest democracy.