A couple of weeks ago on OTB Radio, I suggested that there’s a very real chance that, come October or so, the Democrats will have a bad bout of buyers’ remorse. Paul Lukasiak, guest posting on left-wing talk radio host Taylor Marsh’s blog, says that the real lesson of Hillary!’s primary performances the last several weeks is that they already do:

Ever since the media declared that Barack Obama was “inevitable” after February 19th, based on a two week period when the an unprepared Hillary Clinton campaign suffered “10 straight losses”, rank and file Democratic voters have been sending a message. Rather than rally ‘round the “inevitable nominee” that message has been a consistent, loud, and clear message to the Democratic Party — DO NOT WANT.

In nearly every demographic category since February 19, Clinton percentage of the vote has risen, while Obama’s has fallen. This includes Obama’s supposed “strong” demographic categories such as voters with college degrees post-graduate degrees and voters whose income is above the national median. And Clinton beat Obama in the primaries in March, April and May in most of the major categories.

McCain may not have been the choice of the majority of Republicans, but once he was declared the “inevitable nominee”, rank and file Republicans closed ranks behind McCain. … But Democratic voters refused to accept the pronouncements of the pundits and “analysts”, and have voted in overwhelming numbers in support of Hillary Clinton.

Lukasiak then cites some trends that should give even the most ardent Obama supporter pause:

Once voters realized that Obama would be the nominee, his support within most demographic categories declined, and declined significantly in most cases. Obama’s support declined overall by 2.3%

Clinton’s overall support, on the other hand, increased by 4.7%

He concludes by noting that, while “Obama did manage to increase his support among African Americans overall by 5.4%… the impact of those changes is small.”

Of course, most of the primary voters now telling the party that they don’t want Obama will rally to him once he’s officially nominated. But this is most certainly among the arguments Hillary!’s campaign is making to the superdelegates. 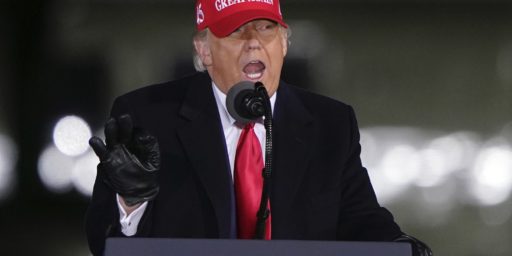