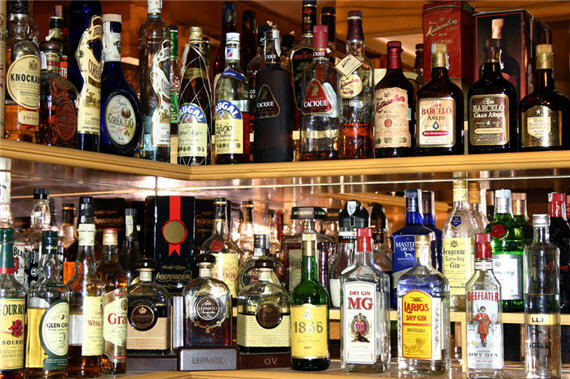 A new study shows that male fruit flies will turn to alcohol when rejected by a female:

They were young males on the make, and they struck out not once, not twice, but a dozen times with a group of attractive females hovering nearby. So they did what so many men do after being repeatedly rejected: They got drunk, using alcohol as a balm for unfulfilled desire.

And not one flew off in search of a rotting banana.

Fruit flies apparently self-medicate just like humans do, drowning their sorrows or frustrations for some of the same reasons, scientists reported Thursday. Male flies subjected to what amounted to a long tease — in a glass tube, not a dance club — preferred food spiked with alcohol far more than male flies that were allowed to mate.

The study, posted online in the journal Science, suggests that some elements of the brain’s reward system have changed very little during evolution, and these include some of the mechanisms that support addiction. Levels of a brain chemical that is active in regulating appetite predicted the flies’ thirst for alcohol — and a similar chemical is linked to drinking in humans.

To test the relationship between stress and alcohol in fruit flies, researchers at the University of California, San Francisco, allowed one group of male flies to mate freely with available virgin females. Another group of male flies had the opposite experience: the females they mingled with had already mated, and were thus indifferent to any approach.

After four days, the flies in both groups fed in glass tubes outfitted with four straws, two providing a regular diet of yeast and sugar and the two containing yeast, sugar and 15 percent alcohol. Fruit flies as a rule will, like many humans, develop a taste for alcohol and in time a preference for the 15 percent solution. But the rejected flies drank a lot more on average, supping from the spiked mixture about 70 percent of the time, compared with about 50 percent for their sexually sated peers.

The researchers conducted several additional experiments to rule out other explanations. The flies were apparently using the alcohol as a way to compensate for their frustrated desire.

No word on whether they started listening to old Sinatra saloon songs.