The Virginia Attorney General's race recount seems to be going in favor of the Democratic candidate. 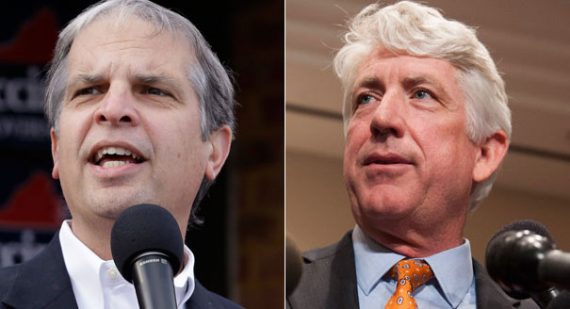 Yesterday concluded the second day of the recount in the Virginia Attorney General’s race and, so far, it is most certainly moving in favor of Democratic candidate Mark Herring:

Democrat Mark R. Herring continued to widen his slim lead over Republican Mark D. Obenshain in the race for Virginia attorney general Tuesday as the recount of the historically close contest spread statewide.

Herring’s lead grew to more than 810 votes, with 73 percent of ballots across the state recounted, according to Herring’s campaign.

Fewer than 120 ballots had been “challenged,” the campaign said, meaning recount officials could not agree on how they should be counted and will forward them to a special recount court in Richmond that will begin its work Wednesday.

The Democrat’s lead was between 811 and 866, depending on how many of the challenged ballots are ultimately counted, Herring attorney Marc Elias said in a conference call with reporters. Herring’s lead is the larger number if all of the challenges are overturned, the smaller one if they are all upheld.

It is not clear what Obenshain will choose to do if, at the end of the recount, Herring leads by more votes than there are challenged ballots.

“This is an ongoing process,” said Obenshain spokesman Paul Logan. “It’s important to see it through and ensure that we get an accurate result. That’s been our goal since the minute polls closed.”

Both campaigns dispatched legions of volunteers to courthouses across the state. Herring’s campaign issued updated tallies throughout the day through conference calls with reporters and Twitter. Obenshain’s campaign did not announce running tallies, but it did not publicly take issue with those provided by the opposing campaign.

The race to succeed Attorney General Ken Cuccinelli II (R) has turned into a protracted nail-biter, one that will not only determine who serves as Virginia’s top law-enforcement official but also could shift control of the evenly split state Senate.

Herring and Obenshain are both senators, and an election would be held to replace whichever one becomes attorney general. Because Obenshain hails from reliably conservative Harrisonburg and Herring from battleground Loudoun County, a win by Herring could cause the Democrats to lose sway in the Capitol. The GOP has a wide margin in the House.

If the 800-vote lead holds, the race will lose its distinction as the closest statewide election in Virginia history. At least initially, the attorney general’s race appeared to knock out the current record-holder, the 2005 contest for attorney general between then-Del. Robert F. McDonnell and Sen. R. Creigh Deeds (D-Bath). McDonnell won that race by 360 votes.

Under Virginia law, most jurisdictions in the state will have to finish their recount by midnight tonight and send any challenged ballots to the three judge panel in Richmond that has been assigned the task of reviewing the challenged ballots that are sent to it to determine if the ballot should be counter, and for which candidate it should be counted in favor of. That task will likely be done by Friday and they panel could issue their ruling on the recount by the end of the day that day or at some point shortly thereafter depending on how quickly they are able to finish their business. If the current trend continues, though, there seems to be no doubt that Herring will be declared the winner, and that it will occur by a wider margin than initially anticipated.

There has been some discussion on Twitter about how it’s possible that Herring has gained far more votes in this recount than Bob McDonnell did in the 2005 recount when he gained less than 100 votes in what, for the moment, remains the closest statewide race in Virginia history. The answer lies in the fact that, in the wake of the 2005 race, the recount law was changed to require jurisdictions to examine ballots in order to determine voter intent rather than merely rerunning them through the optical scanners that are used to count ballots in most Virginia jurisdictions at this point in time. In many jurisdictions, this has resulted in discovering ballots that were not correctly marked, and thus not counted by the scanners, but on which voter intent is clearly evident. Thus, many ballots that were initially counted as ballots where a vote was cast for say, Governor and Lt. Governor but not for Attorney General are now required to be included as counted in the recount in the Attorney General’s race. Ballots where the examiners are unable to agree on the intent of a voter usually end up being the challenged ballots that are being sent to the three judge panel. Apparently, there were a lot of voters in 2013 who didn’t correctly mark their ballots, a development which may suggest that Virginia needs to redesign its ballots to make sure they are easier to understand.

In any event, this race isn’t necessarily going to be over when the three judge panel announces it decision at the end of the week. As I’ve noted before, Virginia law gives the losing candidate in a race the right to petition the General Assembly and contest the election results due to some alleged irregularity. The General Assembly, currently dominated by Republicans would then hold a hearing and decide the election itself. Given the GOP’s dominance in the legislature, it would of course be quite easy for the GOP to give the election to Republican nominee Mark Obenshain. However, it strikes me that this becomes more politically difficult as Herring’s lead grows in the recount. If we come to the end of the week and Herring’s lead is far ahead of the amount of challenged ballots out there, which seems quite probable at this point, then any effort by the GOP to overturn the result in this manner would quite likely not go over very well with the public, and Obenshain would have a very difficult four years in office as he deals with the perception that the election was stolen in a blatantly partisan manner. So far, the Obenshain campaign has not ruled out the possibility of a contest, which makes sense while the result remains in doubt. However, it strikes me that it would be quite foolish to try to use an election contest to take away an election where the result seems evidently clear.

Update: Reports this afternoon indicate the Obenshain will be conceding the race before the end of the day.