Steven Den Beste has a long regular length post answering his critics, some of it mildly amusing. But I just loved this part:

Well, let’s try a little thought experiment. Let’s schedule a debate, and invite a lot of voters. The first speaker stands up and makes a case for one position, laying out his explanation of why the problem happened, and then saying what he thinks needs to be done to solve it, and explaining why he thinks it will help. Then he sits down.

His opponent, on the left side of the stage, stands up, grins at the audience, and pulls his pants down and moons the first speaker. He then returns his pants to their customary position and returns to his seat. End of debate.

If the audience was not partisan ahead of time, which advocate is more likely to have convinced them?

I don’t buy his contention that this somehow illustrates the entirety of the anti-war argument, but it’s damned fine imagery nonetheless. 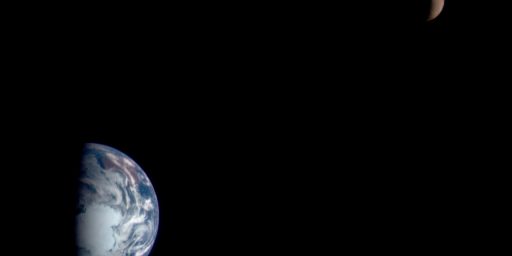 How Many Moons Does The Earth Have?