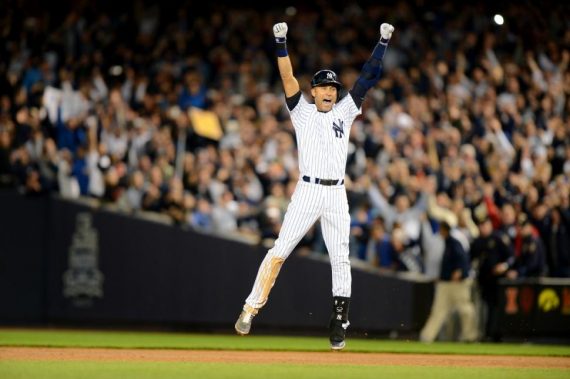 After a season in which he received retirement honors in every city the Yankees played in, last night was Derek Jeter’s last home game at Yankee Stadium, and it ended better than a Hollywood screenwriter could have scripted it:

He almost started crying as he drove himself to Yankee Stadium in the afternoon. He had to turn away from his teammates before the game when they presented him with gifts, so overcome was he by the emotion. In the first inning, he said, he barely knew what was happening, and later, in the top of the ninth, his eyes welled with tears to the point that he worried that he might break down in front of the crowd of 48,613.

But when the time came for Derek Jeter to get a game-winning hit, to add another signature moment to a long list of achievements over his 20-year career, he knew exactly what to do, and seemingly no one doubted that he would.

“Everyone in the dugout and the Stadium knew it was going to happen,” said David Robertson, whose blown save paved the way for one of the most dramatic endings to a game at the new Stadium.

With one out in the bottom of the ninth, Jeter stroked the winning hit and ended his Yankee Stadium career the way he had ended so many games — with both arms raised in celebration. The 6-5 win over the Baltimore Orioles was his 1,627th regular-season victory as a Yankee.

The 3,463rd hit of Jeter’s career sizzled into right field, and Antoan Richardson slid home with the winning run, and the normally stoic Jeter said the ending was almost too much even for him to believe.

“An out-of-body experience is the best way to put it,” said Jeter, who was uncharacteristically expressive after the game.

It was a night when everything seemed to happen specifically to allow Jeter to be Jeter in front of his home fans for the last time. The rain stopped, the Orioles pushed the game to the bottom of the ninth by hitting two home runs, a Yankees runner got to second base, and Jeter came to the plate again with his name ringing in his ears. He then did exactly the kind of thing that had made him so adored by his fans.

Jeter was so overcome with emotion both during and after the game that he shed his usual cautious approach with reporters.

“I don’t know what to tell you,” he said. “Write what you want and put my name at the bottom of it.”

For the record, Jeter went 2 for 5 with a double, three runs batted in and a run scored.

What may have been the best blown save in Yankees history provided him the platform to be a hero once again.

The Yankees were leading, 5-2, heading into the ninth inning, but Adam Jones hit a two-run homer off Robertson, and Steve Pearce hit a bases-empty shot to tie the score. Jeter was at shortstop at the time, and he slumped his head momentarily. But on the bench, his teammates looked at the scoreboard and saw who was batting third in the bottom of the inning.

Soon, they were jumping all over Jeter on the infield as if they had won a big playoff game.

“I went from all-time low to all-time high,” Robertson said.

After the game, Jeter was greeted on the field by his former teammates Mariano Rivera, Andy Pettitte, Jorge Posada and Bernie Williams, as well as his longtime manager Joe Torre, and he hugged them all.

When the congratulations were over, and with the Orioles standing in their dugout watching, Jeter walked out to shortstop for a solitary moment of reflection.

“I wanted to take one last view from short,” he said.

When the team goes to Boston for its season-ending series, he said, he will play in one or two games, but only as the designated hitter.

“I’ve played shortstop my entire career,” he said, “and the last time I wanted to play was tonight.”

It was clear that Jeter would prefer if this wasn’t his final games and the Yankees were headed into the postseason, but just as they did last year when Mariano Rivera retired, the Yankees failed to make the playoffs for the second consecutive year with their loss on Wednesday afternoon. Amazingly, it was the first time in his entire time with the Yankees that Jeter played a game where the Yankees were not either in the postseason or in contention.

As for the end, well, it speaks for itself: