The beginning of the end of an era. 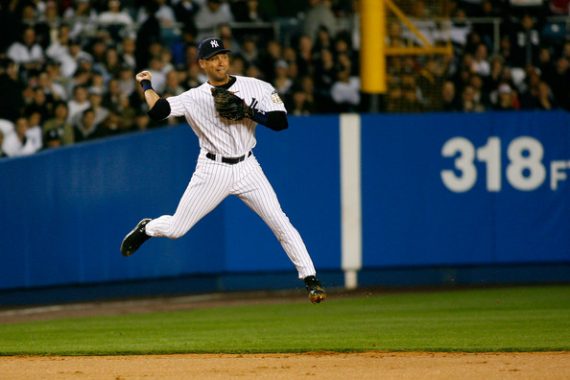 New York Yankees shortstop Derek Jeter, an undeniable future Hall of Famer, will be following in the footsteps of his former teammate Mariano Rivera at the end of the 2014 season:

Yankees shortstop, captain and legend Derek Jeter will retire following the 2014 season. Jeter made the announcement on Wednesday.

Jeter led the majors in hits in 2012 but last season was limited to just 17 games after fracturing his leg in the 2012 ALCS.

The New York Times put it this way:

Shortstop Derek Jeter, entering his 20th season with the Yankees, announced Wednesday on his official Facebook fan page that 2014 would be his final year playing professional baseball.

In a statement that he began by saying thank you, Jeter wrote: “I’ve experienced so many defining moments in my career: winning the World Series as a rookie shortstop, being named the Yankees captain, closing the old and opening the new Yankee Stadium. Through it all I’ve never stopped chasing the next one. I want to finally stop the chase and take in the world.”

Jeter, a 13-time All-Star, has won five World Series rings and was the Series’ most valuable player against the Mets in 2000. He is the Yankees’ career hits leader with 3,316. He broke the record Lou Gehrig held for more than 70 years, when he got his 2,722nd hit in September 2009.

In a statement posted on Twitter, Bud Selig, the commissioner of baseball, said, “In the 21-plus years in which I have served as commissioner, Major League Baseball has had no finer ambassador than Derek Jeter.”

He added, “Derek is the kind of person that generations have emulated proudly, and he remains an exemplary face of our sport.”

Jeter, who turns 40 in June, will enter the 2014 season with a .312 career batting average. He missed all but 17 games last season with assorted injuries, after never really coming back from a broken left ankle sustained in Game 1 of the 2012 American League Championship Series with the Detroit Tigers.

“Last year was a tough one for me,” Jeter said in his statement. “As I suffered through a bunch of injuries, I realized that some of the things that always came easily to me and were always fun had started to become a struggle. The one thing I always said to myself was that when baseball started to feel more like a job it would be time to move forward.”

This isn’t entirely unexpected. Jeter enters 2014 in the final year of his contract with the Yankees and, after the trouble he had coming back from his 2012 post-season injury the idea that he wouldn’t be playing after 2014 was pretty much widespread among sportswriters and Yankee fans. Nonetheless, the announcement means the end of an era for the Yankees that began almost 20 years ago. Jeter was the last seasons retirement by Rivera and pitcher Andy Pettite, Jeter was the last active member of the “Core Four” teammates that guided the team to World Series wins in 1996, 1998, 1999, 2000, and 2009, as well as a streak of playoff appearances that only ended with the 2013 season. It was arguably the most successful the Yankees had been over an extended period of time since the 1950s, if not since the days of the legendary Murderer’s Row. Additionally, like Rivera, Jeter has been among the best ambassadors for baseball from the day he stepped on the field, most notably because he, like Rivera, managed to avoid getting caught up in the PED scandals that have tainted the careers of players like fellow Pettitfe, Roger Clemens, and Alex Rodriguez. The hole he’ll leave in the game will be bigger than just the lack of his presence at the Shortstop’s position in the Yankees infield.

While it may not be quite the amount of fanfare that we saw during Rivera’s last year on the mound, there will no doubt be a number of tributes as the year unfolds and Jeter plays his final games at stadiums around the country. If everything works out, though, and Jeter stays healthy then he’ll be playing his final regular season game at Fenway Park against the Yankees’ arch rival, the Boston Red Sox on September 28th, and his final game at Yankee Stadium on September 25th against the Orioles, a team the Yankees often chased for a playoff spot in the 90s when Jeter first joined the team.

Jeter would be eligible for Hall of Fame induction beginning in 2019, one year later than Mariano Rivera who will most assuredly get inducted in his first-year of eligibility. I suspect we will see much the same for Jeter. 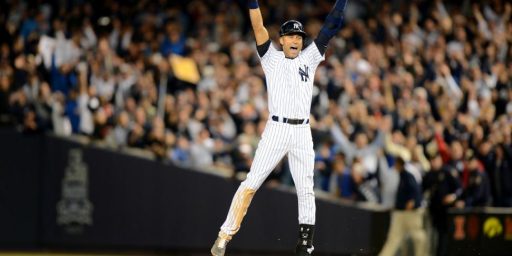