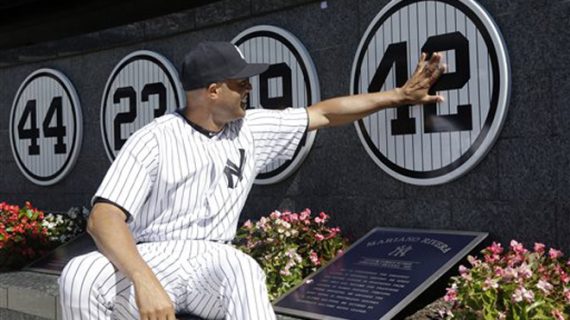 There’s still a week left in the baseball season, and the Yankees still have three home games left before it’s over, but Sunday was the last weekend home game in the 2013 season, and likely the last game of the year for a Yankees team that has seen playoff hopes dim over the past month, but today the team bid farewell to the man that pretty much everyone in the game agrees is the best closer the game has ever seen:

Sunday afternoon at Yankee Stadium was undoubtedly Mariano Rivera’s moment — the gifts, the recorded tributes, the standing ovations — although it might have also been a day to remember and to wistfully say goodbye to a great Yankees era that slowly, and inevitably, is coming to an end.

Rivera was honored by the Yankees for his 19 remarkable seasons with a 50-minute retirement ceremony that delayed the start of Sunday’s game against the San Francisco Giants by nearly an hour. Hardly anyone seemed to care. Yankee Stadium, which for most of the season has failed to sell out consistently, was packed nearly 30 minutes before the 1:05 p.m. scheduled start time.

The ceremony began with Rivera in Monument Park as his plaque and number were added to the other 16 players and managers honored with such a distinction. Since the No. 42 uniform has already been retired by baseball in remembrance of Jackie Robinson, the Yankees switched the number from Dodger blue to Yankee navy. Rivera is the first active player to be honored in Monument Park.

The most peculiar part of the ceremony was during the first chords of his entrance song, “Enter Sandman,” which the rock band Metallica performed live in center field. The music played before the start of the game, when there was no lead to protect.

When the song began, Rivera walked toward the mound to a loud ovation.

“I was nervous for him,” the former Yankees catcher Jorge Posada said. “I got caught up in the moment. Super emotional.”

Rivera stood on the mound for several moments as fans continued to cheer. After being presented with several gifts — a personalized guitar, a rocking chair, a crystal replica of his game glove, and a framed copy of his number in Monument Park — and after his current Yankee teammates came out from the dugout and stood in the infield, Rivera was given the microphone.

“The Lord has blessed me with a great family,” Rivera said as he looked toward his teammates. “All these men have been part of my family. I love you guys, and you are all special to me and my family.”

He then looked to the fans.

“It’s been a great run, guys,” Rivera said. “You guys have been amazing. You will always be part of my heart. You have taken me in like one of you guys, and I do appreciate that.”

“I would’ve loved to have met Mr. Jackie Robinson,” Rivera said. “But it’s a great pleasure and an honor to be the last M.L.B. player to ever wear No. 42. Even though I never met him, he has been a hero and inspiration for me. And I thank Mr. Jackie Robinson for that.”

After this season, Derek Jeter — if he exercises his player option or signs a new deal with the Yankees — will be the lone remaining member of the 1996 World Series championship team. And the expiration date on his career is nearing as well.

But on Sunday, the celebrated core four — Rivera, Jeter, Posada and Andy Pettitte — and Bernie Williams were all on the field at the same time again. All of them a little older, some with a bit more gray hair and all of them seemingly on the verge of tears as the years began to creep back.

“It was very nostalgic for me,” Torre said of the ceremony. “Baseball, while you’re doing it, you think it’s going to last forever. Then some guys just drop out and move on. When you bring everyone together, it conjures up all those memories.”

There’s been a lot of nostalgia for Rivera over the season. He’s received tributes at every stadium the Yankees have visited this year, even last week on the field of the “enemy” at Fenway Park, where he received a heartfelt and respectful farewell. He’ll receive one more when the Yankees close out the season with a three game series against the Astros next weekend. But, it was the Bronx where the legend was made, and where a plaque in his honor will, before long, be erected in Monument Park alongside those of Gehrig, Ruth, and Mantle.

For a fan such as myself the entire ceremony was a fantastic trip down the memory lane of the past 20 years of some fantastic baseball, but perhaps the coolest moment was when Metallica appeared live to perform Rivera’s self-adopted entrance theme, “Enter Sandman.” Sadly, the Yankees didn’t pull off a win for Mariano Rivera Day, although it wasn’t his fault since he came in and held the Giants scoreless. No save this time, but he’s got plenty of them.

Anyway. here’s the ceremony. Sadly, the Metallica performance appears to have been edited out, most likely because of copyright/contract issues: