Desmond Doss, who was awarded the Medal of Honor for extraordinary courage in World War II despite being a pacifist who refused to carry a weapon, died yesterday in Piedmont, Alabama. He was 87. 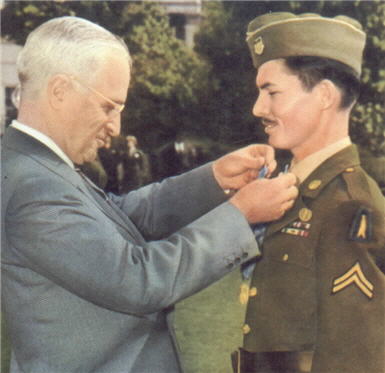 The only conscientious objector to receive the Medal of Honor for non-combatant achievements in World War II died Thursday in Piedmont, Ala. Desmond Doss, 87, refused to carry a weapon during his wartime service as a medic. On May 5, 1945, the 24-year-old Seventh-day Adventist from Lynchburg, Va., stayed atop a cliff on the island of Okinawa, lowering wounded soldiers while under attack.

Desmond T. Doss — the only person to receive the Congressional Medal of Honor for non-combat achievements in World War II and the first conscientious objector to receive the medal — died Thursday. He was 87. Doss, a longtime resident of Walker County, was born Feb. 7, 1919, in Lynchburg, Va. Doss was serving as a medic in the Army’s 77th Infantry Division on May 5, 1945, when he helped 75 wounded soldiers escape capture on the island of Okinawa under Japanese attack.

But despite his objection to killing and war, Doss was a patriotic American who wanted to serve his country. In April 1942, the slight, 5-foot-6-inch, 23-year-old enlisted and was given the Army’s 1-A-O conscientious objector status. He refused to carry a weapon and to perform duties on Saturday, when the Adventists celebrate the Sabbath.

For his bravery Doss received the military’s highest award from President Harry Truman on Oct. 12, 1945. The Army had estimated the number of men Doss saved on that day in May at 100, though the humble Doss stated that it couldn’t have been more than 50. The Army decided to split the difference and put 75 on his citation.

Home of Heroes has a detailed profile. 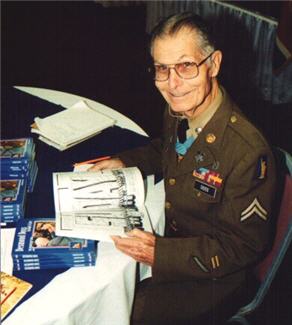 Though he felt no reservation about caring for the medical needs of the men or otherwise helping them on the Sabbath, he refused to violate it. The fact that he worked overtime to make up for it the rest of the week made little difference. Doss was teased, harassed, and ridiculed. And it only got worse.

When it came time for the men of Doss’ training company to begin qualifications on weaponry, Doss refused. He had entered the service as a medic, to heal the wounded, not to kill. As a small boy he had seen a poster showing Cain standing over the body of his dead brother. From that moment on Doss determined that he would never, under any circumstances, take another life.

So what do you do with a soldier who won’t train on Saturday, eat meat, or carry a gun or bayonet? Doss’ commanding officer knew what to do. Paperwork was initiated to declare him unstable, a miss-fit, and wash him out of military service with a Section-8 discharge as “unsuitable for military service.” But Doss wanted to serve his country, he just refused to kill. He performed all of his other duties with dedication, was an exemplary a soldier in every other way. At his hearing he told the board, “I’d be a very poor Christian if I accepted a discharge implying that I was mentally off because of my religion. I’m sorry, gentlemen, but I can’t accept that kind of a discharge.” So the Army was “stuck” with Desmond Doss.