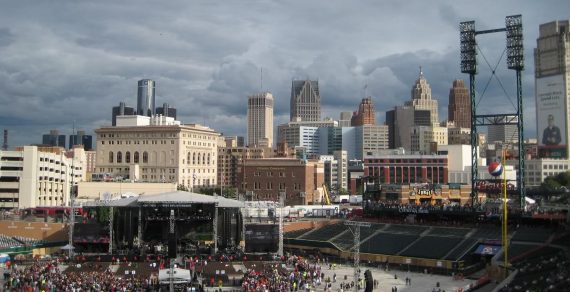 A Federal Judge ruled today that the City of Detroit was indeed eligible to file for bankruptcy protection:

DETROIT — Detroit is eligible to shed billions in debt in the largest public bankruptcy ever in the United States, a federal judge ruled Tuesday, while also finding that the public pensions could be reduced during reorganization despite a provision in Michigan’s Constitution.

In ruling that Detroit was eligible to reorganize under federal bankruptcy law, Judge Steven W. Rhodes said the city met every test of insolvency, including failing to pay its debts and being unable to provide a minimum level of basic services to its 680,000 residents.

“This once proud and prosperous city can’t pay its debts,” the judge said. “It’s insolvent. It’s eligible for bankruptcy. But it also has an opportunity for a fresh start.”

Appeals were expected to be filed quickly. Bruce Babiarz, a spokesman for Detroit’s fire and police retirement system, which supports 8,500 retirees, said lawyers were reviewing the ruling and expected to file an appeal by the end of the week. But the case will continue to move forward, with the next step being the city filing a “plan of adjustment.” It is unclear, however, what portions of the judge’s ruling may be appealed.

Under the ruling, the vastly diminished city, once the nation’s fourth largest and the cradle of the American auto industry, will be allowed to search for a way to pay off some portion of its debts and to restore essential services to tolerable levels under court supervision. The goal, according to Kevyn Orr, an emergency manager appointed by the state of Michigan, is to emerge from court protection next year with a formal plan for starting over.

“Time is of the essence and we will continue to move forward as quickly and efficiently as possible,” Mr. Orr said Tuesday.

In his ruling, Judge Rhodes turned aside objections from unions, pension funds and retirees, which, like other creditors, could lose under any plan to solve $18 billion in long-term liabilities, including $3.5 billion in unfunded pension obligations. He also rejected arguments by unions and other opponents that the bankruptcy filing was the result of secret and unconstitutional decisions made by Gov. Rick Snyder of Michigan, who approved the filing in July, and others.

The filing makes Detroit the largest city in the nation’s history to take such a rare step. Most agreed the situation was dire: annual operating deficits since 2008, a pattern of new borrowing to pay for old borrowing, a shrunken population and tax base, and miserably diminished city services. But under federal bankruptcy provisions for municipalities, known as Chapter 9, a city first had prove its eligibility for protection before it could proceed with a plan to pay diminished sums to creditors.

The judge also rejected the notion that the city should not be eligible for Chapter 9 because the filing was a foregone conclusion.

“Yes of course it was,” Judge Rhodes said of the city’s eligibility for bankruptcy as he methodically went through the historic case during a hearing that lasted more than 90 minutes. “Individuals often wait longer to file for bankruptcy than is in their interest. And Detroit was no exception.”

One central argument from lawyers for the city’s public sector unions and retirees was that Detroit’s request for bankruptcy protection came before it had made good faith attempts to negotiate with creditors — mainly unions and retired city workers. But Judge Rhodes ruled that the size of Detroit’s debts and problems made it “impracticable” for Mr. Orr to negotiate concessions from creditors before recommending the Chapter 9 filing to Governor Snyder.

“It is impractical to negotiate with a stone wall,” was how the judge referred to the unions’ reticence to make concessions on the pension issue.

The judge made it clear that public employee pensions are not protected in a federal Chapter 9 bankruptcy — even though the Michigan Constitution expressly does protect them.

“Pension benefits are a contractual right and are not entitled to any heightened protection in a municipal bankruptcy,” he said.

Federal law, he said, trumps the state law — making the pensions of 23,000 workers fair game for the city to include in its plan of adjustment.

The main battles going forward, of course, will likely be between these public employee unions over the pension issue and the city, and between the city and bondholders. In both cases, the issue will be how much of a “haircut” both sets of creditors will be required to take in order to get to a point where the city can put together a viable plan that will allow it to emerge from Bankruptcy Court with at least somewhat of a chance of surviving going forward. With the Bankruptcy Code and the Court behind it, Detroit is going to have a good chance of winning those battles.

What will be interesting to watch going forward is whether Detroit’s move compels other financially troubled municipalities to follow suit and file for bankruptcy protection themselves. If Detroit is indeed successful in dealing with its pension issues in this manner, then one suspect the temptation for other cities to take the Chapter 9 path will be quite powerful.