Dick Cheney is breaking the mold on how recently-departed vice presidents act. First, he immediately went into attack mode against President Obama. Now, he’s going after President Bush, too. Bart Gelman for WaPo:

Cheney’s disappointment with the former president surfaced recently in one of the informal conversations he is holding to discuss the book with authors, diplomats, policy experts and past colleagues. By habit, he listens more than he talks, but Cheney broke form when asked about his regrets.

“In the second term, he felt Bush was moving away from him,” said a participant in the recent gathering, describing Cheney’s reply. “He said Bush was shackled by the public reaction and the criticism he took. Bush was more malleable to that. The implication was that Bush had gone soft on him, or rather Bush had hardened against Cheney’s advice. He’d showed an independence that Cheney didn’t see coming. It was clear that Cheney’s doctrine was cast-iron strength at all times — never apologize, never explain — and Bush moved toward the conciliatory.”

The two men maintain respectful ties, speaking on the telephone now and then, though aides to both said they were never quite friends. But there is a sting in Cheney’s critique, because he views concessions to public sentiment as moral weakness. After years of praising Bush as a man of resolve, Cheney now intimates that the former president turned out to be more like an ordinary politician in the end.

Gawker’s The Cajun Boy is quite amused:

Now, only Dick Cheney could ever possibly reflect on the “stay the course” presidency of George W. Bush and somehow come to the mangled conclusion that it was conciliatory in just about anything that it did. If there’s one thing that objective people can probably agree almost universally on when assessing Bush as a president, it’s that he and his administration were hopelessly, tragically stubborn.

But Cheney’s actually quite right here. As I’ve been arguing for months, Bush’s foreign policy returned to the Realist roots he campaigned on over time. Wolfowitz, Feith, and the gang were gone in 2005 and Rumsfeld followed them in late 2006. Gelman:

Cheney’s imprint on law and policy, achieved during the first term at the peak of his influence, had faded considerably by the time he and Bush left office. Bush halted the waterboarding of accused terrorists, closed secret CIA prisons, sought congressional blessing for domestic surveillance, and reached out diplomatically to Iran and North Korea, which Cheney believed to be ripe for “regime change.”

This apparently not only hurt his feelings but, more importantly, a shift away from a national strategy Cheney legitimately thought necessary to protect his country. As Kevin Drum intimates, it’s amazing that he thought we were on the right course.

But Cheney himself seems to have changed his mind on a matter of honor. He’s now working diligently on a tell-all book to set the record straight.

Some old associates see Cheney’s newfound openness as a breach of principle. For decades, he expressed contempt for departing officials who wrote insider accounts, arguing that candid internal debate was impossible if the president and his advisers could not count on secrecy. As far back as 1979, one of the heroes in Lynne Cheney’s novel “Executive Privilege” resolved never to write a memoir because “a president deserved at least one person around him whose silence he could depend on.” Cheney lived that vow for the next 30 years.

As vice president, according to one witness, Cheney “was livid” when the memoir of L. Paul Bremer, who led the occupation of Iraq, made the less-than-stunning disclosure that Cheney shared Bremer’s concern about U.S. military strategy. A Cabinet-level Bush appointee recalled that Cheney likewise described revelations by former Treasury secretary Paul H. O’Neill and former White House spokesman Scott McClellan as “beyond the pale.”

“If he goes out and writes a memoir that spills beans about what took place behind closed doors, that would be out of character,” said Ari Fleischer, who served as White House spokesman during Bush’s first term.

Yet that appears to be precisely Cheney’s intent. Robert Barnett, who negotiated Cheney’s book contract, passed word to potential publishers that the memoir would be packed with news, and Cheney himself has said, without explanation, that “the statute of limitations has expired” on many of his secrets. “When the president made decisions that I didn’t agree with, I still supported him and didn’t go out and undercut him,” Cheney said, according to Stephen Hayes, his authorized biographer. “Now we’re talking about after we’ve left office. I have strong feelings about what happened. . . . And I don’t have any reason not to forthrightly express those views.”

I’m generally with Old Dick Cheney on this one. Unless one resigns in protest, one owes a certain loyalty to those whom one serves. Cheney is one of the more controversial and important figures in recent American political history, though, and getting his considered reflections on why things unfolded as they did should be fascinating. 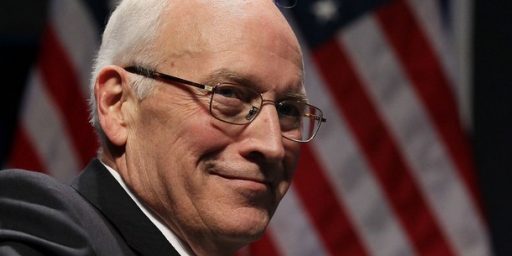