In a silly quadrennial tradition, the residents of Dixville Notch, New Hampshire voted at midnight. It was a tie.

In a silly quadrennial tradition, the residents of Dixville Notch, New Hampshire voted at midnight. It was a tie.

By tradition, the unincorporated village of Dixville Notch, N.H., located in Coos County, is one of two locations that get to cast the first votes of the presidential election just after midnight on Election Day. The other location, also in New Hampshire, is Hart’s Location.

This year, Dixville Notch residents cast their votes in a tie: five votes each for President Barack Obama and former Massachusetts Gov. Mitt Romney. It was the first time in Dixville Notch’s history that a tie was recorded.

From this, we learn that voter enthusiasm in general and enthusiasm for Barack Obama in particular is down markedly from four years ago. Either that, or these are some random folks in a sleepy hamlet to whom we pay way too much attention. 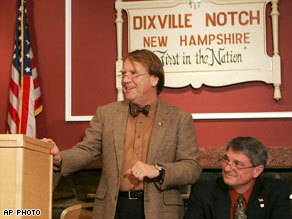