When I saw the NYT headline “Biden Justice Department Seeks to Defend Trump in Suit Over Rape Denial,” I was confused. But, reading the story, it’s rather obviously the right call.

During the presidential campaign, Joseph R. Biden Jr., then the Democratic candidate, slammed his opponent, Donald J. Trump, for a highly unusual legal move: bringing in the Justice Department to represent him in a defamation lawsuit stemming from a decades-old rape allegation.

At one of their debates, Mr. Biden accused Mr. Trump of treating the Justice Department like his “own law firm” in the suit, filed against him by the writer E. Jean Carroll. “What’s that all about?” he sarcastically asked.

But on Monday night, nearly eight months after Mr. Biden’s attack, his own Justice Department essentially adopted Mr. Trump’s position, arguing that he could not be sued for defamation because he had made the supposedly offending statements as part of his official duties as president.

In a brief filed with a federal appeals court in New York, the Justice Department acknowledged that Mr. Trump’s remarks about Ms. Carroll were “crude and disrespectful,” but the department also claimed that the Trump administration’s arguments were correct — a position that could lead to Ms. Carroll’s lawsuit being dismissed.

Mr. Biden has repeatedly said he wants to restore the Justice Department’s traditional independence from the White House — a stance that has been echoed by several of his top picks for the department’s leadership.

That DOJ is doing the legally-correct thing even though it’s politically inconvenient for Biden would seem to indicate its independence.

Even so, the late-night filing caught many, including Ms. Carroll’s lawyers, by surprise and marked another twist in a protracted legal battle.

Unless there’s a statute of limitations issue, I never understand why government agencies would do much of anything late at night.

The details are sordid but the timing is crucial to the understanding:

That dispute began in November 2019 when Ms. Carroll, a longtime columnist for Elle magazine, sued Mr. Trump, claiming he had lied by publicly denying he had ever met her, after she had accused him of rape months earlier. In a book excerpt published in New York magazine that June, Ms. Carroll wrote that Mr. Trump had thrown her up against the wall of a dressing room at Bergdorf Goodman, an upscale department store in Manhattan, in late 1995 or early 1996. Then, she claimed, Mr. Trump pulled down her tights, opened his pants and forced himself on her.

Shortly after the excerpt was published, Mr. Trump said in an Oval Office interview that the assault had never happened and that he could not have raped Ms. Carroll because she was not his “type.” According to the lawsuit, Mr. Trump also issued an official statement accusing Ms. Carroll of lying about the alleged assault.

So, the alleged rape happened long before Trump was President. But, crucially, the book came out more than two decades later, when Trump was President and thus capitalizing on his heightened prominence. Trump was then interviewed in his public office and he answered the questions in a way Carroll didn’t like from said office. I don’t see how it could possibly be other than an official act.

For several months, the defamation suit wound its way through a state court in New York. But then last September, one month after a state judge issued a ruling that potentially opened the door to Mr. Trump sitting for a deposition before the election, the attorney general, William P. Barr, stepped into the case. In a highly unusual move, Mr. Barr transferred the case to federal court and substituted the federal government for Mr. Trump as the defendant.

Federal law forbids government employees from being sued for defamation, meaning that if the move was successful, Ms. Carroll’s claim would be dismissed.

To the extent Carroll’s reputation was damaged by Trump’s response (I’m frankly dubious that it was or, indeed, that someone should have the burden of defending against a defamation suit for denying a rape allegation or saying that the accuser is not his type) it’s a shame that she has no recourse. But the problem is the law shielding government employees from defamation suits, not DOJ’s decision that the President is a government employee or that his speech from the Oval Office is official.

Mr. Barr’s move raised the question of whether Mr. Trump had in fact made his comments about Ms. Carroll as a government employee — a position that Ms. Carroll’s lawyers roundly rejected. “There is not a single person in the United States — not the president and not anyone else — whose job description includes slandering women they sexually assaulted,” the lawyers said in a filing last year.

But that’s an absurd position. If someone lodges a claim that the President of the United States raped them nearly two decades earlier, presumably because it sells more books to make salacious claims about a sitting President than a third-rate real estate broker, it’s rather incumbent on said President to answer questions about the claim. Obviously, he shouldn’t lie about it, much less defame someone in doing so. But, to the extent the law protects public officials from defamation claims, it’s hard to argue that the only Constitutional officer of the Executive Branch of our government isn’t covered.

In October, the first federal judge to consider the case, Lewis A. Kaplan of Federal District Court in Manhattan, agreed with Ms. Carroll, blocking Mr. Barr’s move and deciding that the suit could continue against Mr. Trump in his private capacity. Mr. Trump’s comments concerned events that had occurred “several decades before he took office,” Judge Kaplan ruled, and had “no relationship to the official business of the United States.”

But that’s just a stupid position. These were allegations first levied in a book published during his presidency and statements made while he was President.

Before Mr. Trump left office, the Justice Department appealed Judge Kaplan’s ruling, and many legal observers predicted that a new attorney general, under Mr. Biden, would drop the Trump-era claims.

The brief filed on Monday night was the first time the Biden administration’s Justice Department, now led by Attorney General Merrick B. Garland, weighed in on the issue. In the brief, department lawyers said that when Mr. Trump had denied raping Ms. Carroll, through the White House press office or in statements to reporters in the Oval Office and on the White House lawn, he was acting within the scope of his office.

“Elected public officials can — and often must — address allegations regarding personal wrongdoing that inspire doubt about their suitability for office,” the department lawyers argued, adding, “Officials do not step outside the bounds of their office simply because they are addressing questions regarding allegations about their personal lives.”

I honestly don’t see how it can be otherwise. The nature of being a public figure is that one’s private life really isn’t private.

Ms. Carroll’s lead lawyer, Roberta A. Kaplan, reacting to the new filing, said that as “horrific” as the alleged rape was, it was “truly shocking that the current Department of Justice would allow Donald Trump to get away with lying about it.”

So, this is moronic. Carroll isn’t suing over the alleged rape. To the extent she still has a justiciable case a quarter-century after the fact, this has no bearing on it. She wants to be paid for Trump’s alleged defamation of her when he was President in response to rape charges she levied against him while he was President.

Further, DOJ taking the position that a sitting President is a public official doesn’t end the matter. Indeed, we have a federal judge on the record claiming otherwise. Presumably, at least one appellate court, perhaps even the Supreme Court, will weigh in on the matter.

Beyond that, if Trump isn’t liable for the alleged defamation because he was acting in his capacity as President, that’s not DOJ’s fault. That’s the law. Which DOJ is supposed to uphold.

“In making and defending a Westfall Act certification … the Department of Justice is not endorsing the allegedly tortious conduct or representing that it actually furthered the interests of the United States. Nor is a reviewing court making any such determinations in upholding the Department’s certification,” the acting head of the Justice Department’s Civil Division, Brian Boynton, wrote in the new submission.

Boynton also adhered to the stance the Justice Department adopted in the case last September: that Trump was acting in the course of his official duties as president when he denied Carroll’s rape allegations from more than two decades ago.

“Speaking to the public and the press on matters of public concern is undoubtedly part of an elected official’s job,” Boynton added. “Courts have thus consistently and repeatedly held that allegedly defamatory statements made in that context are within the scope of elected officials’ employment — including when the statements were prompted by press inquiries about the official’s private life.”

Further, as I surmised, this is just part of an ongoing legal battle over the public/private distinction here:

The Justice Department appealed that decision, asking the 2nd Circuit to overrule Kaplan. In January, DOJ lawyers even filed a brief early in an apparent bid to cement the government’s position before Biden appointees took over.

The brief due on Monday night was the first from the Justice Department in the case since Biden’s inauguration.

So, Kaplan’s ruling is still in effect. DOJ is asking the 2nd Circuit to overturn it.

Further, there’s an imperfect precedent for this:

Justice Department attorneys also pointed to a 2006 D.C. Circuit Court of Appeals decision that accepted arguments from lawyers for former Rep. Cass Ballenger (R-N.C.) that a press interview he gave about his separation from his wife was within the scope of his official duties.

In the exchange, Ballenger said one reason for the separation was that his wife was uncomfortable living across the street from the offices of the Council on American Islamic Relations, which he called “the fundraising arm for Hezbollah.” The group sued Ballenger for slander, but the courts ultimately agreed that the congressman was seeking to preserve his official reputation when he addressed the question about his marriage.

Not that it matters, but I would argue being accused on being a fundraising arm for a terrorist group is more defamatory that being accused of lying about a long-ago rape in order to sell books. 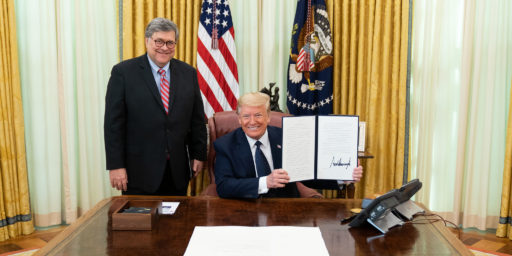 He Got his Man