Donald Trump Goes Rogue, Refuses To Sign On To Group Effort To Work Out Debate Details

Donald Trump is refusing to sign a joint letter to debate organizers drafted by representatives of all the GOP campaigns. Instead, he wants to negotiate with the networks himself.

The attempt to mold an agreement among the Republican candidates for President regarding future debates appears to have fallen apart in the face of a new report from The Washington Post that Donald Trump is refusing to sign the proposed joint letter and will instead negotiate with networks regarding the debates himself:

Donald Trump and his advisers have decided to work directly with television executives and take a lead role in negotiating the format and content of primary debates, which have become highly watched and crucial events in the 2016 race, according to Republicans familiar with their plans.

Trump plans to reject a joint letter to television network hosts regarding upcoming primary debates drafted Sunday at a private gathering of operatives from at least 11 presidential campaigns, the Republicans said.

The move by Trump, coming just hours after more than a dozen Republican strategists huddled in the Washington suburbs to craft a list of possible demands, effectively throttles an effort by the campaigns and the letter’s drafter, longtime GOP attorney Ben Ginsberg, to find consensus and work collectively to negotiate terms.

It also underscores the Trump campaign high command’s strategy of occasionally working with fellow party outsiders — they are friendly with retired neurosurgeon Ben Carson — but otherwise operating on their own, rather than in close coordination with GOP rivals or the Republican National Committee, which has been coordinating debates.

While two of Trump’s senior aides attended the Sunday meeting, they were far from ready to sign a letter, and they left the session unconvinced that a group push on the debates would be helpful to protecting Trump’s front-runner status or providing him with the most possible air time on primetime stages, the Republicans added.

This report comes just a couple hours after the Post had released a copy of the joint letter that was being circulated among the campaigns that consisted largely of a series of questions to debate sponsors and the networks that would be broadcasting the event regarding the format of the event. Among other things, the letter mentions items such as those I wrote about this morning, such as opening and closing statements, the length of the debate, and how much campaigns would be kept informed of debate planning efforts. In addition to those, the letter also touches on objections to so-called “lightening round” questions that require quick responses from candidates to what have typically been inane questions such as what kind of soda they like or their favorite pizza topping, as well as logistical matter such as how the debate would be broadcast, whether it would be available online, and a request that efforts be made to ensure that the temperature on the debate stage be kept at a relatively constant 67 degrees. As I said this morning, most of these demands seems rather reasonable, and the new ones on top of those that initially came out of the meeting don’t really seem all that objectionable. Where the campaigns would likely run into problems, though, are in demands for equal time, or an equal number of questions, for all candidates, and some kind of veto over the kind of camera shots and graphics that would be used during the course of the debate. Along with several of the other demands that go to the format and content of the debate, it strikes me as unlikely that networks would be willing to accept the conditions the letter sets forth, although it’s possible that some of these items would be open to negotiation and, at the very least, some consultation so the campaigns know what they’ll be dealing with during the course of the debate.

All of the work the campaigns have done since last night may be for naught, though, if Trump holds true to his apparent intent to take hold of the debate negotiation process himself. On some level, of course, it’s the kind of play that makes sense for him as it is consistent with one of the central themes of his campaign that frame him as being a great negotiator. Regardless of the fact that this really isn’t as true as Trump likes to lead people to believe, as far as his supporters are concerned this kind of “take charge” action on his part is likely to resonate well with his supporters regardless of how it ends up turning out. Also, it plays into the general conservative disdain for media organizations other than Fox News Channel as being biased against them, something that Trump has played to repeatedly ever since he got into the race.

For the actual effort by the campaigns to present a united front on the debate format issue, though, this is likely to end the effort if Trump actually goes forward with it. As it stands, the reports from last night’s meeting made clear that the campaigns involved had competing interests that made agreement about specifics difficult and unlikely. If the campaign of the man who is actually leading the race right now refuses to go along with the effort, then there’s really no reason for any of the other candidates to go along with a group effort. The initial reaction from some campaigns seems to be that the Trump campaign is free to go off on its own but that the group effort will continue strikes me as overly optimistic. If Trump goes off on his own, some candidates may end up following his lead and trying to cut their own deals, or they may latch on to Trump and just let him handle things for them. If they do that, of course, then Trump will be the one who comes out looking like the winner and the guy who “beat the networks” at the debate game. The next debate, of course, is only eight days away, but since its on Fox Business Network, it’s apparently outside the scope of the joint efforts demands. Whether Trump will seek concessions from Ailes and company as well, though, remains to be seen. 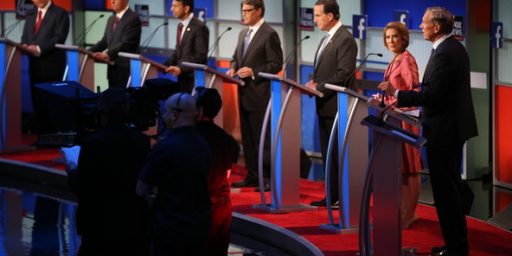