The justaposition of pictures, headlines, and links currently fronting Drudge is amusing: 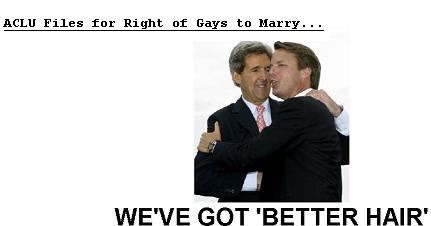 CAN’T KEEP HANDS OFF EACH OTHER

Hugs, kisses to the cheek, affectionate touching of the face, caressing of the back, grabbing of the arm, fingers to the neck, rubbing of the knees…

John Kerry and John Edwards can’t keep their hands off each other!

In the past 48 hours, “candidate handling” has become the top buzz on the trail.

News photographers have been going wild with photos of the two Johns.

“I’ve been covering Washington and politics for 30 years. I can say I’ve never seen this much touching between two men, publicly,” e-mailed one wire photographer.

When asked if the Johns are acting out a cynical focus group series of poses — perhaps to show warmth to the chilly Bush/Cheney — a Kerry spokesperson explained: “I think we’re just seeing genuine affection between them.”

But the spokesperson added, “I hope we do not see them wearing matching outfits when they ride bikes this weekend.”

Sheesh. The photo montage is a bit funny, though.