I’ve never understood the economic arguments made by opponents to immigration. Or I should say, I understand them I just find them blindingly stupid. Case in point, this post by Kevin Drum. Kevin writes the following,

Now that’s an odd thing, isn’t it? Immigration foes like Gilchrist insist that if we only cut down on the supply of Mexican farm workers, wages and benefits would go up and plenty of Americans would be available for harvesting our leafy greens. And yet, despite this year’s severe shortage of Mexican labor, Vessey is apparently offering the same backbreaking work, brutal conditions, low pay, and nonexistent benefits that he always has. Likewise, Ed Curry, a chili farmer who has given up on employing legal workers because the H2A program has “too many snafus,” says only that he would be willing to pay legal workers “a bit more” than he does now.

This is often the argument that many who oppose immigration put forward. We’ll limit the number of immigrants (illegal and legal–after all most immigration opponents nearly had a complete bowel prolapse when Bush came up with his guest worker plan) and wages will rise, Americans will now take the jobs and nirvana will result. What never seems to enter the calculus of these anti-immigration warriors is another possibility: the farmers and other firms simply shut down and don’t hire all that many more Americans or even result in more Americans losing their jobs.

Even Kevin Drum, who is no foe of immigration, doesn’t seem to get this point at all. For example, he writes,

Is this reluctance to increase wages caused by a fear that higher labor costs would make their produce too expensive to sell? On its face, that seems unlikely. Even a whopping 40% increase in farm wages would increase the wholesale cost of produce by only about 10%. But a shortage caused by letting crops go unharvested would surely have the same effect Ã¢€” and supermarkets would continue to buy.

That’s not to say that foreign competition isn’t a real issue for California farmers. It is. Still, the lesson from this natural experiment along the Arizona border seems pretty clear: farmers are flatly unwilling to pay their workers more. Whether that’s because it would price their produce out of the market or because even a big wage increase wouldn’t attract enough legal workers hardly matters. The evidence indicates that farmers would rather let their crops rot in the field than pay ten bucks an hour.

What is missing is a look at the profitiability of the farms. The wholesale cost goes up by 10% yet the cost of labor goes up by 40%. Now maybe labor is only a quarter of the total costs in running a farm, but it may very well be a larger portion, like say 50%. So why would the wholesale price go up by only 10%? Supply and demand. Look at this picture, 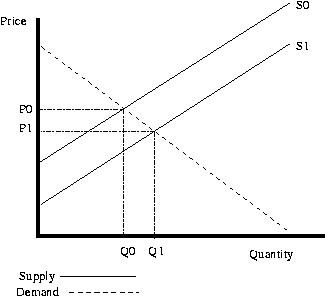 Notice the supply curve has shifted “downwards”. This could represents a shift in supply due to an decrease in costs. But look closely at the distance between the curves S0 and S1 and the price decrease P0 and P1. The distance between the two curves is greater than the price increase. And the same thing works in reverse. Suppose we started at curve S1 and went to S0. In this case, the price increase would be less than the increase in costs. This is why firms cannot simply pass along 100% of their cost increases to their customers. Demand curves are downward sloping. I know this is obvious, but most people just don’t seem to get what the freaking Hell this means. Most people assume that a firms costs go up by $1/unit of output and so the price goes up by $1/unit of output. I’m sure firms would like to do this, but the reponse by consumers prevents this. And the “flatter” the demand curve, the smaller the price increase. For example, if the demand curve was horizontal then there would be no price increase at all. Would supermarkets still buy more expensive produce? Sure. Would consumers? Again, sure. But they wouldn’t have to buy as much. So noting that people would still buy is stupid. Of course they are, the question is how much will they buy. Just as much as before? Maybe, but that tells me that demand is perfectly inelastic, which frankly I doubt.

Still, Kevin does come to the right (in my opinion) conclusion about illegal immigration:

In other words, Gilchrist and his nativist ilk are barking up the wrong tree. What we need isn’t a bunch of yahoos dotting the border with their lawn chairs and cell phones. Instead, we need to recognize that Ã¢€” like it or not Ã¢€” Americans very clearly want and rely on immigrant labor. The key, then, is not to eliminate it, but to figure out a rational way of limiting illegal immigration without simultaneously demonizing immigrants themselves. This might include programs that make it harder to cross the border illegally, but only if we also provide legal status to many more immigrants than we do now.