Egypt On The Brink Of Economic Chaos?

Could economic chaos bring Egyptians back out into the streets? 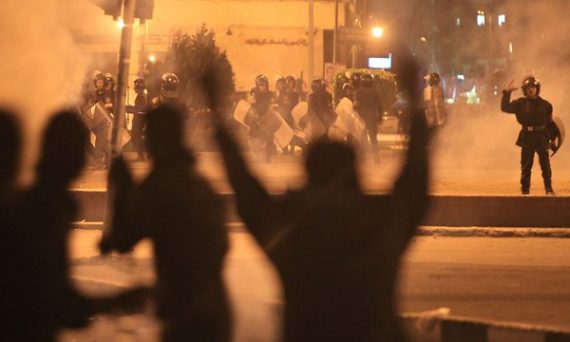 Steven Cook at the Council on Foreign Relations notes that Egypt may be on the brink of a serious economic crisis:

Egypt is perilously close to becoming insolvent, meaning a default on its debts. As I argue in a recent Council on Foreign Relations Contingency Planning Memorandum, despite Gulf assistance, the combination of the country’s economic needs, the legacies of Cairo’s incoherent economic policies of the past along with their continuation today, the political challenges to economic reform, and the potential for exogenous shocks all make a solvency crisis a significant possibility.  This might sound surprising to the casual observer of Egypt.  The economy was a subject of intense coverage in the months preceding the July 3, 2013 coup, but has receded from view as Saudi Arabia, the United Arab Emirates, and Kuwait stepped in with an initial $12 billion infusion of aid that was followed recently with another $8 billion.  The money from the Gulfies was supposed to stabilize the Egyptian economy, but the numbers do not lie.  The country’s foreign currency reserves—between $16-$17 billion—are close to where they were in late 2012 and the first half of 2013, which means Egypt is hovering just above the critical minimum threshold defined as three months of reserves to purchase critical goods.  A portion of those reserves are not liquid and with a burn rate estimated to be $1.5 billion per month, it is easy to understand why Egypt is one exogenous shock—think Ukraine, which is a major producer of wheat and Egypt is the world’s largest importer of it—or political crisis away from default.  The Saudi, Emirati, and Kuwaiti money has merely kept the Egyptians above water.  The expansionary fiscal policies and stimulus that the Egyptian government is pursuing help in the short-run, but they also produce additional near-term debt.  This is not a good place for Egypt to be with government debt at 89 percent of GDP and overall debt at more than 100 percent of economic output.  Much of this has been financed through domestic borrowing—67 percent of Egyptian bank assets are claims on the government.

As Cook notes, the consequences of economic trouble in Egypt could be quite severe indeed:

An economic problem the magnitude of a solvency crisis will only intensify the pathologies that Egypt is already experiencing—violence, political tumult, and general uncertainty.  Economic decline would create a debilitating feedback loop of more political instability, violence, and further economic deterioration. It’s a scary scenario that deserves attention and preparedness, but there does not seem to be much urgency to try to address it anywhere.  Gulf money appears to have lulled people into the sense that the Saudis, Emiratis, and Kuwaitis will stave off disaster.  It’s a false sense of security.

On the surface at least, economic trouble would likely lead to yet another round of political and social unrest in the streets of Egypt’s cities. Indeed, one of the major factors that motivated the protests that brought down Hosni Mubarak in January and February 2011 was the fact that the government had increased the street price of bread and other food staples due to shortages, which in turn caused prices for basic needs to skyrocket across the board. Additionally, while the political actions of the Morsi regime were the focus of the protests that led to the July 2013 military coup, reports at the time also pointed to widespread public frustration with the fact that the new government had done little to fix the economic problems that had existed two years earlier or the widespread unemployment. Another round of economic troubles could lead to another round of protests, which would likely lead to military crackdowns.

The other possibility, of course, is that economic unrest will lead to destabilization of the government of the most populated nation in the Arab world and that Egypt would become a breeding ground for radicalism. We’ve already seem some of this in the sparsely populated Sinai Peninsula where there have been sporadic terrorist attacks over the past several years. Given the nation’s proximity to Israel and Gaza on one side and North Africa on the other, that would be a less than ideal development.

Of course, you won’t see much coverage of this on the cable news networks. There’s a missing plane out there, after all.