End of an Era: Demise of the Bar Car 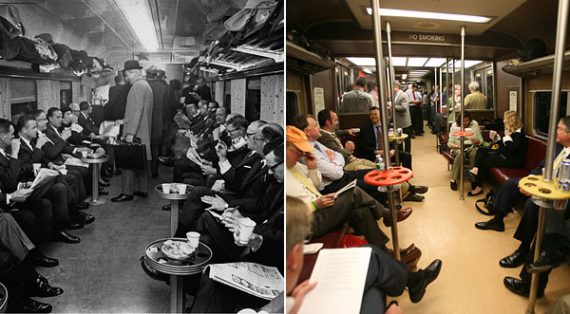 A man can no longer have a civilized tipple while taking the train home from work.

There are those who sip discreetly on subway trains, reaching for the paper bags in their coat pockets, or pull flasks from their knapsacks in the darkened back corners of a city bus.

Such is the stigma of drinking in transit, where the sloshed are supposed to have boarded that way.

But for decades, passengers on the Metro-North Railroad have found a workaround amid the fake wood panels and lounge-style seating of the bar car — the space where everybody may or may not know your name, but none would dare cast a judgmental glare about that fourth beer before the Stamford station.

“The two words you don’t want to hear on the bar car,” said Steve Schleier, clutching his beer can en route to Fairfield, Conn., on Thursday evening. “Last call.”

And yet, for the final commuter rail bar cars believed to be operating in the United States, it is indeed the end of the line. The last of Metro-North’s old car fleet, introduced in the 1970s, has aged out of the system; the 7:34 p.m. train on Friday from Grand Central Terminal to New Haven was the bar car’s final ride before its retirement at the hands of a new, barless model.

Since before World War II, when rail was king and Prohibition was dead, the rolling saloon has been a national staple — its contents relied upon to make the strangers less strange, the commutes less interminable. But over the years, the bar cars began to disappear: Chicago, one of the last holdouts, abandoned its bar service in 2008.

At the end, only Metro-North remained, according to the American Public Transportation Association.

On Thursday, the regulars were left to reminisce, toasting the traveling Christmas parties and medium-stakes sports wagers, softball league allegiances forged on the rails and love stories that owed their start to the spirits of the New Haven line.

Even to defenders, the car is a curious anachronism, culled from an era of liquid lunches and onboard cigars. Smoking was banned inside cars in the 1980s, over some rider objections, but the New Haven bar car has survived, outlasting vanquished drink service carts on other commuter rail operations in the New York area — Metro-North’s Harlem and Hudson lines, and the Long Island Rail Road.

At their peak, Metro-North said, there were 10 bar cars. As the number has dwindled to four, travelers have grown fiercely protective of the privilege, coordinating rides via emails and texts in recent years to ensure the cars would fill.

A website, BarCar.com, founded in 1997, has dedicated itself exclusively to celebrating “this social phenomenon that exists in limbo between work and home.”

An onboard cocktail, the site reads, is “the perfect antidote for the grind that is business in the 20th century.”

That no one bothered to change the date is telling. The bar car seems to have proved too much for this century, its romance bewildering to detractors who saw little but a rolling office party with overtaxed cupholders and cushions absorbing wayward suds.

“Society has changed, D.W.I. laws have changed, the relationships of men and women have changed,” said Mitchell Pally, a board member for the Metropolitan Transportation Authority, which operates Metro-North. “You can wait the hour to get off the train and do what you’re going to do.”

No doubt. And maybe, aside from changing social mores, it just no longer made economic sense to run these cars. But, despite this affecting me not one iota—I don’t commute between New York or Connecticut, seldom ride a train, and never drink during my commute since I exclusively accomplish it driving my automobile—this somehow strikes me as civilization dying just a little bit.