Jessica Biel is “the sexiest woman alive” according to Esquire magazine. 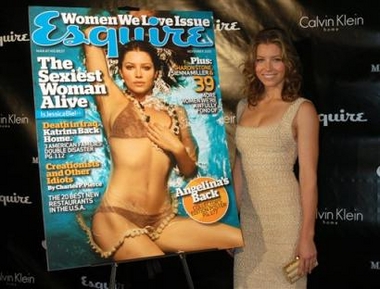 Jessica Biel has been proclaimed “the sexiest woman alive” by Esquire magazine. The actress dons the cover of Esquire’s November issue, following last year’s honoree, Angelina Jolie. The 23-year-old Biel, who began as a teenager on the family TV series “7th Heaven,” plays a supporting role in the upcoming “Elizabethtown” and starred earlier this year in “Stealth.”

“It seemed like it would be great Ã¢€” having named Anglina Jolie sexiest woman of the year last year Ã¢€” to try to come up with somebody who was on everyone’s radar screen, but who was also fresh,” said Esquire editor-in-chief David Granger. “It just seemed like Jessica Biel’s moment.”

The magazine also picks a woman for three older age brackets: the Chinese actress Gong Li, 39; the 47-year-old Sharon Stone; and Rene Russo, 51. “It’s easy to appreciate womanhood without any consideration of age,” Granger says. “Youth isn’t the automatic turn-on it used to be.”

I’ve never seen the show but, judging from the above photo, she’s certainly a good looking woman. I’m not sure what their methodology for ranking is, however. Fortune‘s 500 does not feel the need to proclaim a new “richest man in the world” every year. Likewise, it is unclear what Jolie has done to diminish her ranking this year.