A Federal Appeals Court has struck down a D.C. law requiring tour guides to get a license and pass a test. 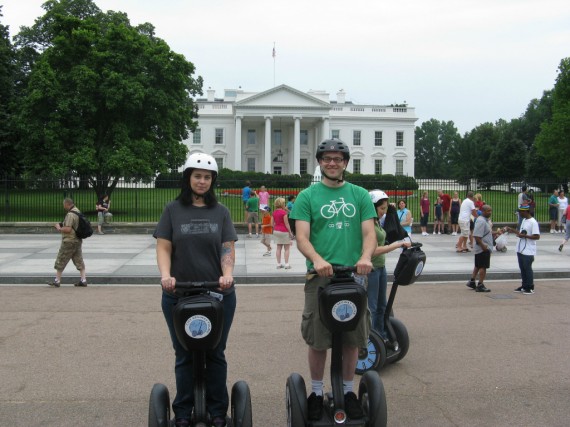 On Friday, a Federal Appeals Court in Washington, D.C. struck down a city ordinance that required people giving tour guides to be licensed by the city, a license they can only obtain after passing a test:

Getting paid to tell tourists about D.C. history will no longer involve passing a 100-question test or paying a fee. Anyone can just show up and talk without fear of arrest.

On Friday, the U.S. Court of Appeals for the D.C. Circuit threw out a 108-year-old city code requiring every “sightseeing tour guide” in the city to be licensed after correctly answering 70 out of 100 multiple-choice questions.

The decision is a victory for Tonia Edwards and Bill Main, the married couple who together operate the (illegal, until Friday) Segway tour company Segs in the City and have battled the regulations since 2010.

The $200 cost of the licensing process was too high for many of their guides, they said, often recent college graduates who work in the business for only a few months.

In her opinion, Judge Janice Rogers Brown, joined by the two other judges on the panel, ruled that the city’s licensing exam was an unconstitutionally broad solution to a problem that may not exist.

“What, pray tell, does passing the exam have to do with regulating unscrupulous tour businesses and unethical guides?” she wrote. “How does memorization of addresses and other, pettifogging data about the District’s points of interest protect tourists from being swindled or harassed by charlatans?”

Audio guides are not subject to any such regulation, she noted, nor are guides who stand at one spot rather than escorting customers from site to site. Under the current code, a sightseeing bus could regale tourists with the voice of “a drunk off the street,” so long as the drunk was prerecorded.

Her decision overturns a previous ruling in U.S. District Court. In a motion filed in that court, the D.C. Attorney General’s Office contended that the law was “a legitimate exercise of the District’s police power to protect visitors to and residents of our city.” The regulation did not violate the First Amendment because the content of tours was not at issue, they said. Judge Paul L. Friedman agreed, finding that “the licensing scheme is aimed at conduct and does not unconstitutionally burden speech.”

The appeals court suggested narrower regulations aimed at fraud in the industry or a voluntary accreditation scheme for guides who would like to be listed as city-approved.

On Friday, Main called the ruling a “victory for small business.”

“There’s no need for the city to license us to speak,” he said.

Matt Simpson, who has been a guide with Segs in the City for five years, said the market weeds out bad tours, with people taking to Web sites such as Yelp and TripAdvisor to describe their experiences.

Simpson said even people who pass the test can get things wrong. He noted a news story he came across when the suit was filed, quoting a licensed tour guide incorrectly calling the Eisenhower Executive Building the Old Executive Office Building.

“If you’re going to criticize us at least get it right,” Simpson said, pointing out that the building’s name was changed in 1999.

Robert McNamara of the Institute of Justice, a libertarian law firm that represented the guides in the District and also is involved in the New Orleans case, said he would love to see the conflict go to the U.S. Supreme Court to address what he describes as “an explosion in government overreach and litigation of what we call occupational speech, people who talk for living.”

Under the D.C. code, unlicensed tour guides were technically at risk of a $300 fine or 90 days in jail. But an administrator at the Department of Consumer and Regulatory Affairs told the District Court that no guides had been issued an infraction notice since 2005. “In fact, none of my staff can recall ever citing a tour guide or tour guide company,” he wrote.

This ridiculous testing requirement for tour guides is just one example of some of the egregious occupational licensing laws that the Institute of Justice and similar libertarian-oriented law firms have fought against for many years now.  While most people are familiar with the licensing laws that cover things like the medical and legal professions, for which there is an at least colorible argument in favor of the idea that people who hold themselves out to the public as being in a certain profession should have to demonstrate some minimum level of competence in the field and, more importantly, be subject to discipline from a central authority that exists outside the court system, these laws have been extended far beyond those areas. Depending on what city you or state that you live in, you’ll find that you need to get a license form some central authority to go into business as everything from a barber to a mortician to someone who braids hair in the style often preferred by African-Americans.  In many cases, you will have to pay substantial fees and pass a test in order to get that license, assuming you can even get that far. For the most part, the authority that grants these licenses is made up of representatives from the industry in question who clearly use their power to restrict competition and, most importantly, punish people who are competing against them. In that respect, they are acting in the same way as the cab companies protesting against companies like Uber and Lyft, but instead of causing traffic jams like the cabbies in Washington, D.C. did, they are using the cover of law.

With regard to the facts of this case, the Court is, of course, absolutely correct that the licensing requirements for tour guides were absurd, as George Scoville argued some three years ago when he looked at the regulations in question:

Tourism is the 2nd largest industry in the nation’s capital, behind government, and licensing regulations are designed to prevent commercial fraud. But despite the money that pours into the city annually as global visitors flock to the area on personal and business travel, the industry is curiously small:

Tourism ranks behind only government as a local industry in D.C. — 15 million visitors spend more than $5 billion a year in the region. The District licenses about 900 tour guides.

So there’s no doubt that, in terms of real dollars, tourism is a major industry-whether or not that should be a significant government interest is a completely separate discussion-but is the general welfare of society really at stake here? That certainly isn’t clear, particularly when word travels fast in this town, and that any tour guide business deliberately committing commercial fraud by lying about D.C.’s history to its consumers would quickly be sniffed out as phony and go out of business. It also isn’t clear to what extent tour guides account for D.C.’s annual tourism income.

Call me crazy, but I just don’t think many people would believe that Paul Bunyan dug the Tidal Basin so his pet the Loch Ness Monster could have a swimming hole near the Jefferson Memorial.

I also don’t think that, as long as the seat of the federal government is in Washington, people will stop coming to the D.C. area anytime soon and spending exorbitant amounts of money on tourism, restaurants, and hotels, just because maybe one or two bad apples give phony tours. It’s certainly not clear that this was ever the case with Edwards, Main, or Segs in the City, and three months in prison for lacking a professional license for something as innocuous as guided tours of a famous city seems like cruel and unusual punishment.

The other part of the argument against these rules, and the one that the D.C. Circuit discusses at great length in the opinion is that these regulations essentially constitute a prior restraint on speech, as McNamara pointed when this battle began:

The licensing process is expensive and time-consuming (rife with fees, forms and a written examination), but Bill and Tonia’s chief objection to the licensing program is one of principle:  They believe that the government has no role in deciding who may (or may not) speak.  Their customers can decide for themselves whether Bill and Tonia are worth listening to.

That is enough for Bill and Tonia’s customers, and that should be—must be—enough for D.C.’s city government as well.  As the U.S. Supreme Court has repeatedly made clear, the First Amendment embraces a free marketplace of ideas.  D.C.’s attempt to prevent guides like Bill and Tonia from bringing their ideas to market simply cannot stand.

Although IJ is arguing this case under the First Amendment to the Constitution, it is important to keep in mind that this law is just like the countless occupational-licensing requirements that IJ has challenged in the past:  a barrier to entrepreneurship that does nothing at all to protect consumers.  This case is simply an illustration of the expansiveness of mandatory occupational licensing.  There is virtually nothing government thinks you should be able to do without its permission, not even describing things.

This case takes aim directly at that idea and advances the basic notion that everyone has the right to communicate for a living—whether they work as TV news reporters, tour guides or stand-up comedians—without first asking the government for permission.  The First Amendment guarantees that right, and IJ will continue to protect it—in D.C., in Philadelphia and beyond.

As anyone who has ever taken their visiting relatives on a tour of the area where you live, there is no such thing as an expertise required to be a tour guide. Any person with a basic knowledge of the area that they’re in can perform the task. To the extent that there is alleged “public interest” in ensuring that tour guides can pass some ridiculous test, it is served by the fact that a competitive marketplace of tour guides will necessarily winnow out the bad ones. It would seem to me that this is especially true in the case of tour guides that cater primarily to tourists. In the modern age, such people are going to be looking online to find someone to perform a tour, or they are going to be asking the people at the hotel they happen to be staying at. In both cases, there are informal screening procedures that help to weed out the bad companies and reward the good ones. Furthermore, unlike lawyers who must pass a Bar Exam or physicians who must pass their licensing exam, the worst that happens to people who do business with a tour company that hires people who aren’t knowledgeable about the history of their area is that they walk away with incorrect or incomplete information. That’s far from ideal, of course, but it doesn’t rise to the level of damages a person who goes to someone holding themselves out as a lawyer or a doctor could suffer if things are not handled competently. Admittedly, licensed lawyers and doctors can still make mistakes or act improperly, but the odds of that happening are far lower with the screening process in place than without it. When it comes to tour guides no, the idea that such people need to be licensed by the state is quite simply absurd, and it’s difficult to see such regulations as anything other than an effort by the politically connected incumbents in the marketplace to protect themselves from upstarts. That is not a proper function of government.