A Federal Judge has blocked enforcement of a Dept. of Justice policy purporting to block funding to so-called 'sanctuary cities.' 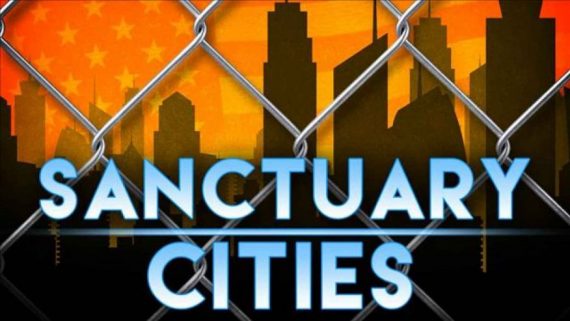 A Federal Judge in Illinois has issued an injunction against a Trump Administration policy that attempted to withhold funds from so-called “sanctuary cities” that declined to turn over suspects to Federal immigration authorities:

A federal judge on Friday blocked the Justice Department from withholding grant funds from places that do not provide immigration authorities access to local jails or give advance notice when suspected illegal immigrants are to be released — dealing a major blow to the Trump administration’s vowed crackdown on sanctuary cities.

U.S. District Judge Harry D. Leinenweber in Illinois wrote in a 41-page opinion that Attorney General Jeff Sessions had probably exceeded his lawful authority when he imposed new conditions on particular law enforcement grants, requiring recipients to give immigration authorities access to jails and notice when suspected illegal immigrants are to be released.

The judge blocked Sessions from implementing the conditions not just on the city of Chicago — which had sued over the matter — but also across the nation, writing that there was “no reason to think that the legal issues present in this case are restricted to Chicago or that the statutory authority given to the Attorney General would differ in another jurisdiction.”

His ruling follows an order from another federal judge in California blocking President Trump’s executive order on sanctuary cities.

In a statement, Justice Department spokesman Devin O’Malley said: “By protecting criminals from immigration enforcement, cities and states with ‘so-called’ sanctuary policies make their communities less safe and undermine the rule of law. The Department of Justice will continue to fully enforce existing law and to defend lawful and reasonable grant conditions that seek to protect communities and law enforcement.”

Chicago Mayor Rahm Emanuel (D) said the ruling was an “affirmation of the rule of law” and “an assertion of our most fundamental American values.”

The judge issued a preliminary injunction, which means the administration is blocked temporarily while the case makes its way through the courts.

As noted, this is the second time this year that a Federal Judge has put a stop to Trump Administration efforts to punish cities that don’t cooperate with the Federal Government regarding detaining of people who are in the country illegally by withholding certain forms of Federal-aid related to law enforcement and other activities. Back in April, a Federal Judge in California presiding over a case filed by Santa Clara, County and the City of San Francisco barred the enforcement of an Executive Order signed by President Trump that purported to withhold significant amounts of Federal funds from so-called “sanctuary cities.” As I noted at the time, in that ruling the Judge relied upon a series of Supreme Court rulings that have had the impact of severely restricting the ability of the Federal Government to compel states and localities to enforce Federal law using local resources, or to compel them to take certain action such as passing certain laws. The Judge in that case also ruled that the effort to enforce any such rule via Executive Order exceeded Presidential authority and that only Congress could take the action that the President was purporting to take. That injunction remains in effect and is currently on appeal with the Ninth Circuit Court of Appeals.

The Chicago case relies on a different set of restrictions resulting from a policy announced by Attorney Jeff Sessions back in July. At that time, Sessions announced new restrictions that would be placed on Federal aid to so-called sanctuary cities, including certain grants related to state and local law enforcement program. In response, Chicago filed the underlying lawsuit, in this case, claiming under a variety of legal theories that placed restrictions on the ability of the Federal Government in general and the Executive Branch in particular to place requirements on monies received by states and localities that go beyond the authority granted to it by Congress and the Constitution. To a large degree, the Judge presiding over this case accepted the arguments that Chicago advanced, while largely rejecting those brought by Justice Department lawyers defending the policy that Session had announced.

Ilya Somin, who has written on the legal arguments related to retaliation against sanctuary cities comments on this decision in a post that goes into detail about the ruling, but also points out one area where Somin believes the Judge errantly ruled in favor of the Federal Government. In previous posts on the sanctuary city issue, Somin has laid out a fairly convincing argument in favor of the proposition that the current efforts by the Trump Administration to punish sanctuary cities for not cooperating with immigration authorities is impressible. You can read those posts here and here. Somin’s co-blogger David Post has also written about the issue himself and is similarly skeptical of the ability of the Federal Government to force states and localities to enforce Federal immigration laws. I’ve also written about the Supreme Court precedent that forms the basis for the arguments against the idea that the Federal Government can force compliance with Federal laws by state and local authorities in my posts about the April decision regarding the Trump Executive Order and the announcement of the Chicago lawsuit last month. Basically, all these posts make the point that the Executive Branch cannot impose conditions on the receipt of Federal money beyond those specifically imposed by Congress, and that even Congress cannot impose conditions on the states and their localities when doing so violates the powers granted to it by Article I of the Constitution and the limitations imposed on Federal action by the Tenth Amendment.

As Somin notes with regard to the Chicago case, Judge Harry Leinenweber. who was appointed to the Federal bench by President Reagan in 1985, found that two of the three conditions that Sessions purported to place on cities receiving the grant money. These included the requirement that immigration enforcement authorities be given access to any detention facility to determine the immigration status of any person being held there regardless of whether or not they had grounds to believe that any of the inmates was in the country illegally and to give immigration authorities 48 hours notice before releasing anyone that those authorities have identified as being in the country illegally. In so doing, the Court found that the statute authorizing these grants placed no such restriction on their availability and did not give the Executive Branch this authority to impose additional requirements over and above those set forth in the law. As a result, those restrictions cannot be enforced pursuant to Judge Leinenweber’s injunction.

At the same time, though, Leinenweber did let one provision of Sessions’ directive stand. Specifically, he held that localities must prove compliance with Federal law that bars them from restricting communications between the Department of Homeland Security and Immigration and Customs Enforcement and local or state llaw enforcement authorities regarding the immigration status of any person held in their custody. Given the fact that there’s very little that states and localities can do to prevent any Federal agency from sending whatever kind of notice they want to local or state law enforcement, I’m not sure exactly what it is Sessions’ policy aims for here. It seems to me that DHS and/or ICE would be free to send such agencies anything they want, the real question is whether or not those agencies can be compelled to act on that information. In that respect, the decision handed down yesterday makes it fairly clear that they cannot, as does the decision handed down in Apri by Judge William Orrick in the Califonia case. In any case, as Somin points out it’s not clear how Judge Leinenweber can simultaneously rule that Sessions could not impose restrictions on the grants in question, and find that Sessions cannot legitimately impose any additional restrictions on receipt of the grants beyond those imposed by the statute itself imposes, and yet at the same time hold that one of those restrictions is acceptable.

Somin puts it this way:

The requirement in question forces grant recipients to comply with 8 U.S.C. Section 1373, which mandates that “a Federal, State, or local government entity or official may not prohibit, or in any way restrict, any government entity or official from sending to, or receiving from, the Immigration and Naturalization Service information regarding the citizenship or immigration status, lawful or unlawful, of any individual.”

Judge Leinenweber recognizes that nothing in the statute authorizing the Byrne grants specifically mandates compliance with Section 1373. But he concludes that Section 1373 is nonetheless a condition of the grant, because the authorizing statute states that recipients must “comply with all provisions of this part and all other applicable Federal laws” (emphasis added). The Justice Department claims that “all other applicable Federal laws” includes all laws that regulate the recipient jurisdictions in any way, while Chicago argued that “applicable” laws include only those that specifically regulate recipients of federal grants. Leinenweber correctly notes that both interpretations are “plausible.” He could have saved a lot of trouble if he had just stopped right there.

The Supreme Court has also ruled that the Spending Clause of the Constitution requires grant conditions to be “related” to the federal purposes that the grant program was established to pursue. Figuring out what counts as a “related” purpose is far from an exact science. But it’s pretty obvious that, if the Byrne grants are conditioned on compliance with every federal law that regulates cities in any way, at least some of those requirements are going to be unrelated to the law enforcement purposes that the Byrne program was established to promote. If Judge Leinenweber’s and Jeff Sessions’ interpretation of “applicable” is correct, that would mean that this part of the statute is unconstitutional.

If Somin’s position is correct, then it means that Judge Leinenweber’s decision gives both Chicago and the Federal Government grounds for appeal that should make appellate consideration of this case rather interesting. In Chicago’s case, the argument on appeal would be with regard to the Judge’s finding that Sessions did have the authority to force compliance with Section 1373 even though it clearly doesn’t seem to be related to the grant program in question and clearly isn’t a Congressionally required provision that states or localities must comply with to receive such grants. The Federal Government, obviously, would be appealing his decision regarding the remaining requirements that Sessions purports to comply with. At the very least, this is likely to mean an extended briefing schedule in the Seventh Circuit Court of Appeals due to the fact that the court would be required to hear appeals from both parties on different, albeit related, issues raised by the ruling in this case.

For now, though, the injunctions against both Trump’s Executive Order and most of the requirements imposed by Attorney General Sessions in August will stay in effect unless and until they overruled by a higher court.