The man some of called America's toughest Sheriff has been dealt a setback by a Federal Judge. 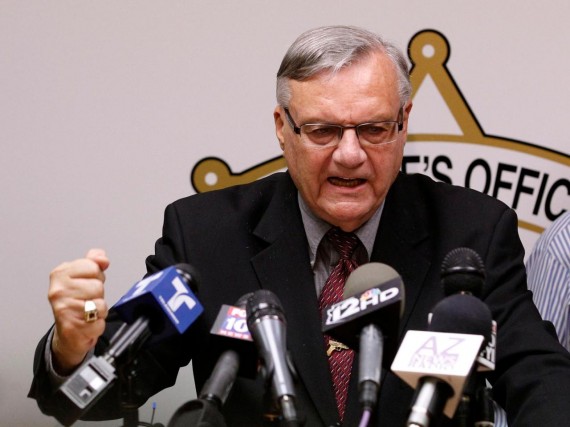 For years now, Maricopa County, Arizona Sheriff has been both a darling of the hard right and a subject of increasing focus from civil rights advocates and the Federal Government over allegations that his department was acting in a discriminatory manner, especially toward Latinos. It’s not hard to understand why he’s been such a darling of the right, in addition to being a “law and order” Sheriff who would engage in such tactics as forcing his male inmates to wear pink prison gear, Aripaio has been at the forefront of cracking down on illegal immigrants even before it became a national issue. For years now, his department has been sending patrols into Latino areas of his county in search of people here illegally and then dragging them back to one of the large outdoor jails that he’s constructed as means of dealing with the jail overcrowding issue that has been an issue in Maricopa County for years now. It’s these very immigration tactics, though, that brought Apraio to the attention of the Justice Department. Two years ago, the Department accused him of violating the rights of Latinos in the manner he ran the program, and after negotiations ended with Arpaio refusing to accepting Federal conditions on how the program was run, he was formally sued by the United States for Civil Rights violations. Yesterday, after a trial, a Federal Judge ruled that Arpaio and his department had violated the rights of Latinos in the manner in which they ran their immigration enforcement raids:

PHOENIX — A federal judge ruled on Friday that Sheriff Joe Arpaio and his deputies had violated the constitutional rights of Latinos by targeting them during raids and traffic stops here and throughout Maricopa County.

With his ruling, Judge G. Murray Snow of United States District Court delivered the most decisive defeat so far to Sheriff Arpaio, who has come to symbolize Arizona’s strict approach to immigration enforcement by making it the leading mission for many of the 800 deputies under his command at the Maricopa County Sheriff’s Office.

At 142 pages, the decision is peppered with stinging criticism of the policies and practices espoused by Sheriff Arpaio, who Judge Snow said had turned much of his focus to arresting immigrants who were in the country illegally, in most cases civil violations, at the expense of fighting crimes.

He said the sheriff relied on racial profiling and illegal detentions to target Latinos, using their ethnicity as the main basis for suspecting they were in the country illegally. Many of the people targeted were American citizens or legal residents.

It also prohibits deputies from reporting a vehicle’s Latino occupants to federal immigration authorities or detaining, holding or arresting them, unless there is more than just a “reasonable belief” that they are in the country illegally. To detain them, the ruling said, the deputies must also have reasonable suspicion that the occupants are violating the state’s human-trafficking and employment laws or committing other crimes.

Tim Casey, a lawyer for the Maricopa County Sheriff’s Office, said the office intended to appeal, but in the meantime it would “comply with the letter and spirit of the court’s decision.”

He said the office’s position is that it “has never used race and never will use race to make any law enforcement decision.”

Attorneys for the Sheriff’s Department said that their officers had been trained by the Department of Homeland Security as part of its immigration enforcement program and said that if there were any problems, it was because of the training from DHS. The problem with that theory, of course, is that the Maricopa County Sheriff’s Office is only one of many American police departments to have received this DHS training, and yet it’s the Maricopa County Sheriff’s Office that has consistently been accused of racial discrimination. Obviously, if there was something wrong with the DHS training, we’d be hearing reports of other departments elsewhere in the country having similar problems. The fact that we haven’t strongly suggests that the problems here are something unique to the the MCSO rather than something endemic about the DHS program itself.

Indeed, reading through Judge Snow’s 142 page opinion, and especially the Findings of fact that he makes during the course of the opinion, it’s pretty clear that the problems here are something that seem to be a result of Arpaio’s leadership and the policies that he’s had in place going back for years before the DHS training ever took place. What emerges from those findings is a picture of an agency that was clearly dedicated toward systematically focusing on Latinos in the name of “immigration enforcement,” which is exactly what Arpaio has been accused of for several years now over his vehement denials. This man may be politically popular, but he’s also been breaking the law, and it’s about time that someone called him on it.

As noted in the article, the Department is planning to appeal this decision, but that’s not going to be easy. Decisions such as this that are so heavily base on a Judge’s factual findings are notoriously difficult to overturn on appeal because appellate courts will not question those findings unless they can be shown to be clearly erroneous, an extremely high standard that is rarely met. At some point, it would seem, Joe Apraio is going to have to finally admit he was wrong whether he wants to or not.