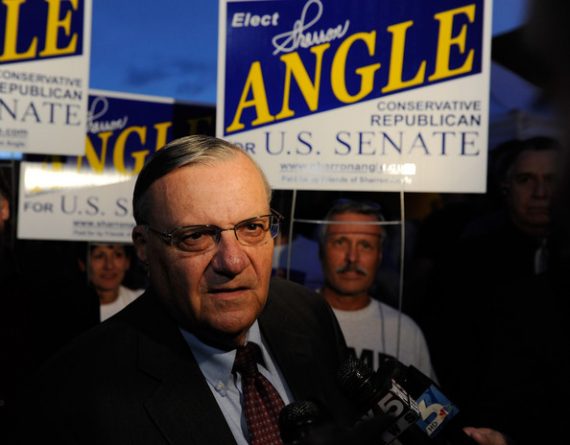 The Civil Rights Division of the Department of Justice has released a harsh assessment of the practices of the Maricopa County, Arizona Sheriffs Department, which happens to be led by a man who has become something of a darling of the right:

PHOENIX — In a harshly worded critique of the country’s best-known sheriff, the Justice Department accused Joe Arpaio of the Maricopa County Sheriff’s Office of engaging in “unconstitutional policing” by unfairly targeting Latinos for detentions and arrests and retaliating against those who complain.

After an investigation that lasted more than two years, the civil rights division of the Justice Department said the sheriff’s office has “a pervasive culture of discriminatory bias against Latinos” that “reaches the highest levels of the agency.” The department interfered with the inquiry, the government said, prompting a lawsuit that eventually led Mr. Arpaio and his deputies to cooperate.

“We have peeled the onion to its core,” said Thomas E. Perez, the assistant attorney general for civil rights, noting during a conference call with reporters on Thursday morning that more than 400 people were interviewed as part of the review. Mr. Perez said the inquiry raised the question of whether Latinos were receiving “second-class policing services” in Maricopa County.

The report stems from a civil inquiry and Mr. Perez said he hoped that Mr. Arpaio would cooperate with the federal government in turning the department around. Should he refuse, a lawsuit will be filed, Mr. Perez said, adding that the Justice Department is conducting a separate criminal inquiry of the department.

Mr. Arpaio was singled out for criticism in the report, which faulted him as distributing racially charged letters and e-mails he had received and helping to nurture the department’s “culture of bias.”

The findings, which Mr. Arpaio is sure to contest, paint a picture of a department staffed by poorly trained deputies who target Latino drivers on the roadways and detain innocent Latinos in the community in their searches for illegal immigrants. The mistreatment, the government said, extends to the jails the department oversees, where Latino inmates who do not speak English were mistreated.

“The absence of clear policies and procedures to ensure effective and constitutional policing, along with the deviations from widely accepted policing and correctional practices, and the failure to implement meaningful oversight and accountability structures, have contributed to a chronic culture of disregard for basic legal and constitutional obligations,” the report said.

The report said that Latino drivers were four to nine times more likely to be stopped in the sprawling county, which includes Phoenix and its environs, than non-Latino drivers. The expert who conducted the study called it the most egregious racial profiling he has ever seen in this country, said Mr. Perez, the prosecutor.

The report said that roughly one-fifth of the traffic-related incident reports generated by the department’s human smuggling unit contained information indicating the stops may have been conducted in violation of the Fourth Amendment’s prohibition on unreasonable seizures.

The report also suggested that Mr. Arpaio’s well-publicized raids aimed at arresting illegal immigrants were sometimes prompted by complaints that described no criminal activity but referred to people with “dark skin” or Spanish speakers congregating in an area. “The use of these types of bias-infected indicators as a basis for conducting enforcement activity contributes to the high number of stops and detentions lacking in legal justification,” the report said.

It’s been clear for years that Arpaio is a man who has little respect for the Constitutional rights of the accused, and even less when those accused happen to have brown skin and speak with an accent. One would like to think that this would finally be the thing that gets him out of office after being overwhelmingly elected five times, but that may be asking too much of the residents of Maricopa County.