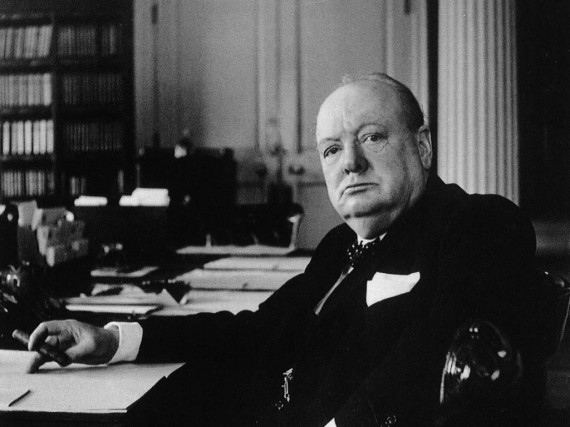 , the first two volumes of what was supposed to have been historian William Manchester’s planned three-volume biography of England’s iconic war time Prime Minister. They remain among the best historical biographies I’ve ever read, but they also left me wanting more. Volume Two ends in 1940, at the height of the Blitz and at England’s greatest hour of need when Churchill was finally recalled from the political wilderness after his warning about the rise of Nazi Germany had been ignored for many years. Volume Two was also listed by Time Magazine as one of the best works of English non-fiction of the 20th Century.

There was a gaping hole, however. The height of Churchill’s legend, after all, comes during World War II and everyone was waiting for Manchester to get around to finishing his book. Sadly, old age and poor health delayed the project and Manchester died in 2004. Fortunately, the project didn’t die and the final volume is coming out this year:

[R]ight now I want to be the first to bring to your attention a major publishing event next November, just in time for Christmas.  On November 20, Little, Brown will finally publish The Last Lion: Winston Spencer Churchill: Defender of the Realm, 1940-1965, the third volume of the Churchill biography begun by the incomparable narrative stylist William Manchester.  (You can already pre-order from Amazon.)  Old age and ill-health prevented Manchester from completing the third volume beyond the first few chapters, and it fell to Paul Reid, a journalist who was close friends with Bill Manchester (as Paul refers to him) to complete the long-awaited final volume.

Through a long chain of circumstances I’ve come to know Paul a little, and we’ve had long conversations about Churchill, Manchester’s writing style and research method, and the trials and tribulations of writing long-form narrative non-fiction.  Paul kindly shared a few draft chapters with me; I think he’s got the hang of Manchester’s literary sensibility.  Manchester’s first two Churchill volumes are susceptible to a number of substantive and stylistic criticisms, but they are unquestionably the most popular Churchill biographies for a reason: Manchester captured the context of Churchill extremely well, and his narrative style is virtually unequalled.

This is excellent news, if only because Reid is completing Manchester’s project and appears to have done a good job at it. I’ll be putting this one on the Christmas list, I think.