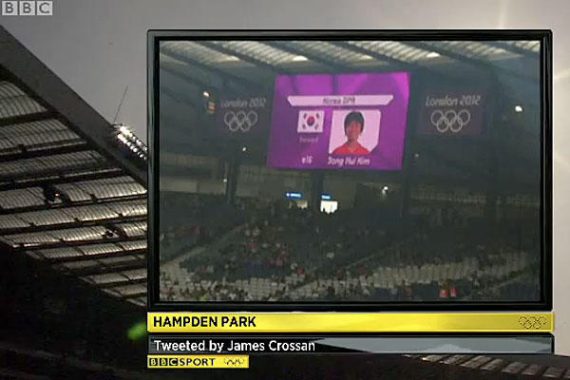 Yesterday’s first round women’s soccer match between North Korea and Colombia started more than an hour late because of an error on the part of organizers:

In the long history of the Olympic Games, stretching across more than a century, two World Wars, and a Games put on by the Third Reich, one might think that exchanging the South Korean flag for the North Korean flag might not be the worst mistake ever made by a host nation.

Olympic flag mix-ups tend to be along the lines of flying the Estonian flag upside-down, as happened in Barcelona after the breakup of the Soviet Union, says David Wallechinsky, author of “The Complete Book of the Olympics.”

“This is way more insulting,” says Wallechinsky. “To actually raise the flag of a nation considered your enemy – that’s a real bad one.”

The mistake made at Hampden Park in Glasgow, Scotland, led to the delay of the women’s soccer game between North Korea and Colombia for about an hour after the North Korean team walked off the pitch. A video introducing the North Korean players showed their faces next to a South Korean flag.

Technically, North and South Korea are still at war, since they never signed a cease-fire after the Korean War.

One can say that the North Korean teams reaction was a bit overblown perhaps, but the error by the organizers was really rather egregious. The North and South Korean flags don’t even look similar, and South Korea isn’t even fielding a women’s soccer team this year. Dumb mistake guys.

Photo via The Christian Science Monitor