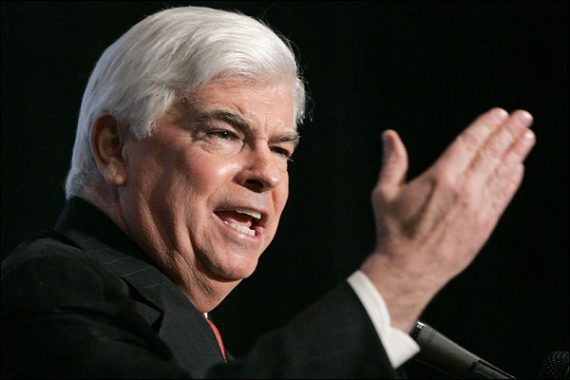 Former Connecticut Senator Chris Dodd will soon have what some have called the best job in Washington:

LOS ANGELES — Christopher J. Dodd, the former Democratic senator of Connecticut, was named as Hollywood’s top lobbyist on Tuesday, a move that might initially prove tricky because of lobbying restrictions for former members of Congress.

The Motion Picture Association of America, which is counting on Mr. Dodd to revive its diminished influence, announced that he would take over on March 17 as its chairman and chief executive. The job, which will pay about $1.5 million a year, will require Mr. Dodd to push a Hollywood agenda in Washington that includes a more aggressive government stance against piracy and an effort to persuade China to lift limits on the distribution of Western movies.

The association’s power has faded in the years since the retirement in 2004 of its leader of several decades, Jack Valenti, but a reduced operating budget and Silicon Valley’s increasing influence contributed to its problems.

Mr. Dodd, 66, will take on all of this while complying with a law that, among other things, restricts the amount of lobbying that former senators can undertake on Capitol Hill. Until 2013, Mr. Dodd cannot directly work to influence his former colleagues. He faces no limits when it comes to overseeing a lobbying strategy, however, according to the Center for Responsive Politics. He can also testify before Congress.

“I have no intention of violating either the letter or spirit of that law, which is one I support strongly,” Mr. Dodd said in a telephone interview. He said he saw his job more as ambassador for the movie industry on the global stage and as an architect of legislative strategy. “There are other people here who do that,” he said of direct lobbying efforts.

Mr. Dodd added that he saw the Motion Picture Association as “anything but diminished.”

Whether he’s lobbying or not, Dodd will get to hang out with movie stars and executives and host premiers in D.C. so, you know, nice work if you can get it