President Obama criticized Sony for backing down, and said that the U.S. would respond to North Korea's cyber attack "at a place and time we choose," 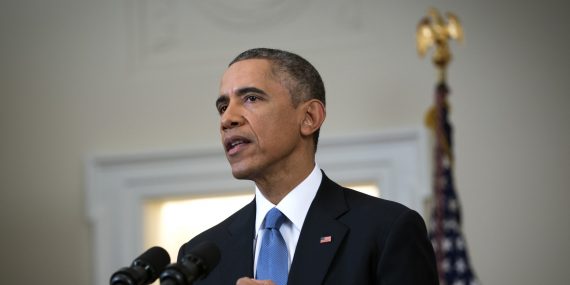 As expected, the very first question that President Obama got at his end-of-the-year press conference today was about the news that the F.B.I. had determined that North Korea was behind the hacking attack against Sony Pictures, and in answering the question the President both vowed that there would be a response to what North Korea has done and criticized Sony for pulling the movie:

WASHINGTON — President Obama on Friday said that the United States “will respond proportionally” against North Korea for its cyberattacks on Sony Pictures, and criticized the studio for giving in to intimidation and pulling the satirical movie that provoked the attacks.

Mr. Obama said the response would come “at a place and time we choose,” but declined to be more specific about what it would be. He said that “we have been working out the range of options that will be presented to me.”

His threat came just hours after the F.B.I. said it had extensive evidence that the North Korean government organized the cyberattack that debilitated the Sony computers, marking the first time the United States has explicitly accused the leaders of a foreign nation of deliberately damaging American targets.

Sony this week dropped its plans for the release of “The Interview,” a movie that depicts the assassination of the North Korean leader, Kim Jong-un, after threats were made against the theater companies that intended to show it.

In criticizing Sony’s leadership for withdrawing the film, Mr. Obama argued that the precedent it set could be damaging — and that the United States could not give in to intimidation. He said that it would encourage other countries to sabotage documentaries, “or news reports they don’t like.”

Mr. Obama did not pass up the opportunity to take a jab at the insecure North Korean government for worrying about a Hollywood comedy, even a crude one.

“I think it says something about North Korea that it decided to mount an all-out attack about a satirical movie starring Seth Rogen,” he said, smiling briefly at the ridiculousness of an international confrontation being set off by a Hollywood creation.

Washington (CNN) — President Barack Obama on Friday said that Sony Pictures made a mistake in canceling the release of a movie after a cyberattack from North Korean-backed hackers.

“I am sympathetic to the concerns that they face. Having said all that, yes, I think they made a mistake,” Obama said at a news conference Friday. “Let’s not get into that way of doing business.”

“We cannot have a society in which some dictators some place can start imposing censorship here in the united states because if somebody is able to intimidate us out of releasing a satirical movie. Imagine what they start doing once they see a documentary that they don’t like or news reports that they don’t like,” Obama said. “That’s now who we are. That’s not what America is about.”

Here’s the video of the question, and the President’s response:

The head of Sony Pictures, who ultimately made the decision to pull the movie after distributors declined to show it, pushed back on the idea that his company had made a mistake, or even that it had pulled the movie:

Sony Entertainment CEO Michael Lynton, denying that the studio had “caved” by scrapping next week’s opening of “The Interview,” fired back Friday after President Obama said the studio had “made a mistake.”

“The president, the press, and the public are mistaken as to what actually happened,” Lynton said in an exclusive interview with CNN’s Fareed Zakaria. “We do not own movie theaters. We cannot determine whether or not a movie will be played in movie theaters.”

Lynton said he would be “fibbing” to say he “wasn’t disappointed” in Obama’s remarks.

“I don’t know exactly whether he understands the sequence of events that led up to the movie not being shown in the movie theaters,” Lynton said. “Therefore I would disagree with the notion that it was a mistake.”

In Friday’s CNN interview, Lynton went on to say that Sony had not “caved” to the hackers.

“We have not given in. And we have not backed down. We have always had every desire to have the American public see this movie,” Lynton said.

Lynton’s response, of course, is largely based on the fact that Sony’s decision to cancel the premier was basically a fait accompli once the major film distributors and theater chains had decided, independent of Sony itself, that they would not be showing the picture regardless of what decision Sony itself made. Left with that fact, which essentially meant that there would be nowhere to show the film with the possible exception of a handful of independent theaters, Sony really had no other choice but to pull the movie. In theory at least, this doesn’t have to be a permanent decision. Sony could end up working out deals with the theaters to get the movie back in on a limited and low-key basis, at least for a limited period of time, it could just go ahead and release the movie on DVD and make it available in On Demand and streaming formats, or it could make the film available essentially for free at some point in the future. Given the fact that projections indicate that the studio has already spent some $40 million on the movie and stood to lost millions more because of its decision, there’s no doubt that they would probably like to release it at some point in the future. However, given the fact that it was reported earlier today that the hackers behind the attacks have promised additional attacks if Sony does anything to make the film available anywhere in any format at any time, the company would still be taking some kind of risk if it did what Layton says the company wants to do. For the time being, then, it is simply not true for Layton to say that the company had not “caved” to the hackers, because that is exactly what they have done and what they will continue to do as long as they keep the movie away from the public.  I don’t necessarily fault Sony for making this decision, though. If they had released the movie and something had occurred that caused injury to others, it would have caused irreparable harm to the company that likely would not have been covered by any form of insurance at all. Additionally, as a I noted, once the big theater chains made their decision there really wasn’t much that the company could do, at least not for the time being.

That being said, I believe that President Obama has a point here that is worth considering. Giving in to a threat like this is only likely to encourage others to make similar threats in the future. What if some other rouge dictator is offended by a news report in The New York Times, or a documentary that shows the human rights abuses that their regime has engaged in? What if the next thing that sets the North Koreans off is the upcoming documentary from Amnesty International? Backing down in the face of threats, while an understandable reaction from risk averse businesses, only seems certain to guarantee that such events are more likely to happen. If the President made a mistake in his remarks, it was in limiting his criticism to Sony since as Lynton makes clear in his comments, it wasn’t just Sony’s decision that led to the cancellation of the December 25th premiere, but that doesn’t mean he is wrong in principle. What is at stake here, in the end is a principle about freedom of expression and the idea that there ought to be no idea that is forbidden from being expressed, even if it something that someone finds deeply offensive. Even more, self-censorship in the face of what amounts to terrorism in the cyber world, if not an act of war, accomplishes nothing but guaranteeing that it will happen again.

In an important sense, though, the ball is still in President Obama’s court. There obviously needs to be some response to what has happened here, and it needs to be one that is loud, clear, and emphatic. It should send a message not just against using the Internet as a means of covert war unless one wants to pay the price of retaliation, but also that we will not sacrifice our own principles to the demands of the rest of the world based on threats. What that the appropriate response might be is not an easy question, and I’m certain that the people who get paid to make those decision will be working overtime in the coming days and weeks notwithstanding the upcoming holidays, is well above my own pay grade, but I do know we’ve got to figure something out because otherwise this will happen again.