Hackers who have divulged embarrassing secrets from deep within Sony Pictures are now threatening violence if a film about a plot to kill Kim Jong Un is released. 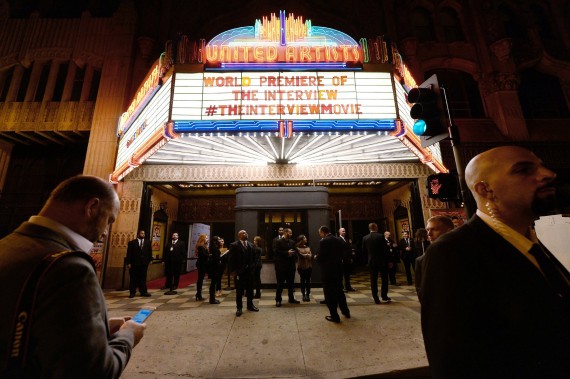 The hacking scandal at Sony Pictures, which I wrote about earlier this week from the perspective of whether or not the information leaked through these hacks could be legally barred from publication, has taken a decidedly more serious turn with threats of terrorism if the company goes ahead with the premier of The Interview, a movie starring Seth Rogan and James Franco in which the two main characters are recruited by the C.I.A. to kill Kim Jong Un:

LOS ANGELES — Sony Pictures Entertainment, the F.B.I., theater owners and competing film studios scrambled on Tuesday to deal with a threat of terrorism against movie theaters that show Sony’s “The Interview,” a raunchy comedy about the assassination of the North Korean leader, Kim Jong-un.

The threat was made in rambling emails sent to various news outlets Tuesday morning. A version posted by The Hollywood Reporter said, in part: “Remember the 11th of September 2001. We recommend you to keep yourself distant from the places at that time. (If your house is nearby, you’d better leave.)”

The email specifically aimed its threat at “the very times and places” at which “The Interview” is to be first shown. The film is set for release on Christmas Day.

On Tuesday night, Landmark’s Sunshine Cinema said it had canceled the film’s New York premiere scheduled for this week; its Los Angeles premiere was held Dec. 11 without incident.

That email warning turned a continuing attack on Sony by hackers from a matter of theft to one of terrorism. A spokeswoman for the F.B.I. said it “is aware of the threat and is continuing to investigate the attack on Sony.”

Late Tuesday, a person with knowledge of Sony’s dealings said that the theater chain Carmike Cinemas had canceled its showings of the movie. Carmike could not be reached for comment.

A Homeland Security official said the department was analyzing the threat but as yet had found no clear indication of an active plot against theaters. Sony had no comment.

Tuesday’s development posed an ugly dilemma for Sony and exhibitors: whether to pull “The Interview,” caving to hackers who have wreaked havoc with Sony’s digital systems for weeks in an attempt to block the release, or to forge ahead, risking possible violence and potential legal liability. In an already-fragile industry, studio executives privately voiced concern that any theater violence could swing the market further toward home viewing.

Several people briefed on Sony’s internal discussions on Tuesday said the studio was not withdrawing the film but had told theater owners that it would not object if they canceled or avoided booking “The Interview.” Those people spoke on condition of anonymity. Theater owners have been particularly pressed by the operators of malls and stores within them to avoid the film, two of those people said.

An executive for one of the theater chains, who also spoke on condition of anonymity, called the invocation of the 9/11 terror attacks by hackers “a game changer.” The executive last week dismissed the notion that theater owners might shy away from “The Interview” over earlier, more general threats by North Korean officials and pressure from the hackers, who have called themselves the Guardians of Peace. Nobody yet knows the hackers’ true identity.

Representatives of AMC Entertainment, Regal Entertainment and Cinemark, North America’s three largest theater chains, did not respond to queries. A spokesman for the National Association of Theater Owners, which represents exhibitors, declined to comment.

Pressure to pull the “The Interview,” which stars Seth Rogen and James Franco and is directed by Mr. Rogen and Evan Goldberg, has centered on its depiction of Mr. Kim’s assassination. To depict the killing of a sitting world leader, comically or otherwise, is virtually without precedent in major studio movies, film historians say. Mr. Rogen canceled planned publicity interviews on Tuesday.

But a broad threat of theater violence, following a sustained attack on Sony’s digital existence, is also without precedent, and opens a new range of worry for Hollywood.

As Sony and exhibitors spoke in a 2 p.m. conference call on Tuesday, they faced the concerns of competing studios, whose important holiday films will be playing side-by-side with “The Interview” in multiplexes nationwide.

A further complication is a general reluctance, even after the 2012 mass shooting at an Aurora, Colo., theater, to visibly increase security, which might create an impression that multiplexes in general are not safe and might complicate dealings with their own insurers.

It is not unusual for studios to face threats for planned releases. In 2012, Sony was peppered with less specific threats related to “Zero Dark Thirty,” about the killing of Osama bin Laden. It opened largely without incident. Universal Pictures in 1988 was besieged by angry protesters when it released Martin Scorsese’s “The Last Temptation of Christ,” with its depiction of an earthy Jesus; more than a dozen people were injured when Christian opponents of the film firebombed a Paris theater showing the movie.

But those actions stopped short of what hackers appear to have promised on Tuesday.

On top of these announcements comes the news that Rogan and Franco had canceled all of their media appearances associated with the film, an unusual step that you don’t usually see when its associated with a film that a studio had intended a major publicity push for. Of course, it’s been some time since any film had seen the kind of threats that have been associated with the release of this film. The question, though, is just how serious those threats actually are. It’s true that North Korea has been complaining about this movie for months now, but things seem to have taken a far more threatening turn since the hacking story broke and we started to see information from internal Sony records ranging from employee records, many of them confidential, to internal emails between and among executives discussing any number of topics that have proven to include the kind of embarrassing revelations that have been all over the media lately.

The latest news, though, is obviously of a different tone. The party or parties responsible for the hacking, or someone else entirely, is threatening terrorism if Sony goes ahead with showing a movie that, but for all of this, many of us might never have heard of to begin with. It may not even be a very good movie. After all, the premise itself seems rather silly and neither Rogan nor Franco are exactly known for Oscar-level acting. Additionally, it’s worth noting that the North Korean connection that everyone assumes to exist here is just that, an assumption. Yes, it’s true that the North Korean government has vociferously condemned the film, and that the hackers have done the same, but we have no real evidence of any connection between the two, or even that the North Koreans would be capable of such a widespread hacking campaign. Some have suggested that the hackers are international freelancers of some sort who have been hired by Pyongyang to target Sony in this manner, and that’s certainly possible. It’s also possible that there’s no real connection at all and that the hackers have merely latched on to the North Korean complaints about Sony for their own purposes. Furthermore, notwithstanding the threats that have been made, the Department of Homeland Security says that there are no credible threats of terrorism that they have been able to detect:

The Homeland Security Department says there’s no reason to think there’s a credible plot to attack U.S. movie theaters on Christmas Day as a protest against the Sony movie “The Interview,” despite threats from the Sony hackers.

A DHS official, speaking on condition of background, said the department is aware of a threat made Tuesday by the group that hacked Sony.

A message uploaded to two online messageboards warns that “We will clearly show it to you at the very time and places ‘The Interview’ be shown, including the premiere, how bitter fate those who seek fun in terror should be doomed to.”

“The world will be full of fear. Remember the 11th of September 2001,” they add chillingly, and call the movie “awful.”

The message also links to a new tranche of stolen emails, this time from the inbox of Sony Pictures Entertainment CEO Michael Lynton, effectively confirming that the message does come from the hackers.

Sony had no comment. The FBI emailed a statement that it is “aware of recent threats and continues to work collaboratively with our partners to investigate the Sony attack.”

Notwithstanding the lack of a credible threat, of course, it would seem prudent to at least take the threats seriously to the extent that prudence and heightened security are called for. I could see the logic, for example, of canceling the high profile premiers for fears that they could become the target of some lone wolf or something. I don’t think, though, that the movie should be pulled completely, not so much because I have any real desire to see what sounds like a not very good slapstick comedy starring two actors that haven’t really impressed me in the past, but because I don’t think it would  be a good idea to bend to pressure like this due to the precedent it would set. If Sony and the theater owners relent to threats of terrorism here, what’s to stop another group withe a grievance from making similar threats in the future? Whether these threats are the work of North Korea or some group of hackers, they shouldn’t be ignored but they also should not be allowed to stand.

F.B.I. Charges North Korea With Being Behind Hacking Attacks On Sony