In a column entitled, “Free to Choose Obesity?” Clark Medal winning economist Paul Krugman argues that freedom to overeat is something that the government should reconsider:

It is more important, however, to emphasize that there are situations in which “free to choose” is all wrong – and that this is one of them.

And even if children weren’t a big part of the problem, only a blind ideologue or an economist could argue with a straight face that Americans were rationally deciding to become obese. In fact, even many economists know better: the most widely cited recent economic analysis of obesity, a 2003 paper by David Cutler, Edward Glaeser and Jesse Shapiro of Harvard University, declares that “at least some food consumption is almost certainly not rational.” It goes on to present evidence that even adults have clear problems with self-control.

Above all, we need to put aside our anti-government prejudices and realize that the history of government interventions on behalf of public health, from the construction of sewer systems to the campaign against smoking, is one of consistent, life-enhancing success. Obesity is America’s fastest-growing health problem; let’s do something about it.

It’s certainly true that some people are predisposed to overeat and that our bodies covet foods that carry calories we no longer need because evolution has failed to catch up with economics. But so what?

Government is already educating children on the perils of obesity. They were doing that thirty-odd years ago when I was in grade school, before obesity hit epidemic proportions. Ensuring that the public is aware of the latest scientific knowledge is well within the scope of government authority. But controlling our diets? I think not.

Yes, we should “do something” about obesity. I suggest more exercise and less food. 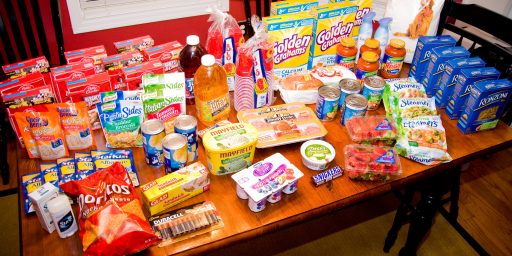