George Mason economics chair Donald Boudreaux observes that “almost everyone today in the Western World is vastly better off than were the overwhelming bulk of the human population before the industrial revolution.” The standard explanation for this, technology, is inadequate.

Technology clearly has advanced over the years, and happily it continues to do so. And these advances are indeed indispensable to our modern way of life. But the deeper cause of our widespread wealth isn’t technology; rather, it’s the force that unleashes and directs the human energy necessary to produce technological advances and its fruits: free markets.

Markets are more fundamental than is technology to prosperity. For evidence, look no further than the fact that billions of people today remain desperately poor. People in Niger and North Korea are starving to death now, even though the technical knowledge for growing and distributing basic foodstuffs is readily available across the globe. Many Latin Americans and Eastern Europeans still carry their goods to and from market on wooden carts, despite the easy availability of automotive technology. Countless other people today dwell in earthen huts, have no indoor plumbing, die of malaria, and suffer all manner of other dangers and indignities that are easily avoided with commonplace technologies.

He illustrates this argument with some statistics culled from the Economic Freedom of the World: 2006 Annual Report:

Rather stark. Now, it is not inconceivable that “economic freedom” is a proxy for some other, more important, variable. I’m not sure what it would be, however.

UPDATE: Dave Shuler wonders of “proxy” is the right word, noting the ongoing “experiment” in China.

It’s unclear (to me, at least) whether “economic freedom” is the key variable or something that exists because of several other conditions. At one point, “economic freedom” (like “democracy” in international relations studies of war) was simply a proxy for “Western European countries and places populated by its progeny.” Japan was an outlier. With growing freedom in places like Taiwan, India, Brazil, and other non-Western countries, though, we’re starting to get more meaningful data.

UPDATE: (Steve Verdon) Actually the concept of economic freedom includes many of the things that Dave Shuler brings up. Dave writes,

I’m not sure proxy is the right word, James. I think that there are a number of interrelated factors involved including the rule of law, civil liberties, representative democracy, attitudes toward the individual, the primacy of reason and evidence in solving problems. And markets.

There’s a great experiment going on right now in China: can modest economic liberalization result in sustainable growth in the absence of the other factors above? It has so far but I don’t think the results are really in yet. What we’ve learned is that modest economic liberalization can result in enough gains to hoist a country from being the poorest of the poor into the world’s middle class. Sustainable? We don’t know.

The Cato Report, lists the key ingredients of economic freedom as,

The civil rights movement in this country was in part about things like voluntary exchange. Being prohibited from going into a business and conducting trade with the business is pretty much the definition of prohibiting voluntary exchange (coordinated by markets). Similarly with things like freedom to enter and compete in markets as well as the protection of the person and their property from aggression by others (lynchings, cross burnings, and so forth).

The economic freedom index measures five different areas which are

Also, China’s economic freedom score has gone from 3.8 in 1980 to 5.7 in 2006 (the same score as in 2004). That is a 50% increase. While China is clearly not one of the freest countries on the planet, the idea that there has only been modest change is a somewhat dubious assertion.

To be sure these concepts are fuzzy. For example, the civil right/liberty for freedom of speech and the press may have an impact on economic freedom, but the connection is less clear cut than being able to walk into a diner and not being kicked out because of one’s race. But it seems pretty clear as well, that in some regards China has become more free and along with it, the economy has grown very rapidly. And while correlation does not always imply causation, the areas where China has improved in terms of freedom are areas we’d expect to lead to greater economic activity. 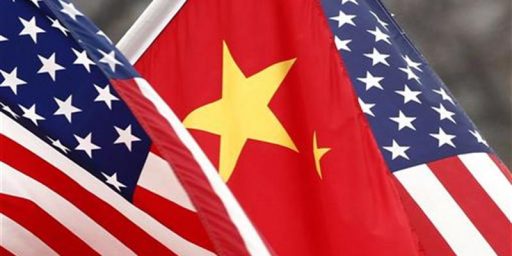