Two-term New Mexico governor finally gets to share the stage with Herman Cain. 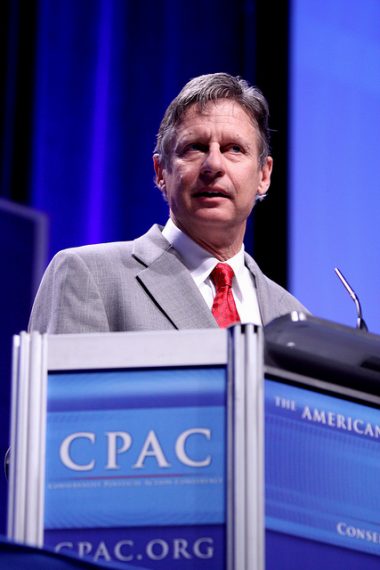 Former New Mexico governor Gary Johnson is set to participate in Thursday’s Republican debate in Florida after clearing the 1% hurdle in recent polls, according to The Daily Beast‘s Howard Kurtz:

The former New Mexico governor won the right to participate, according to Fox sources, by cracking 1 percent in the latest five national polls in which he was included—Fox News, CNN, McClatchy-Marist, ABC, and Quinnipiac—which was the criterion the network had set for inclusion.

Johnson is a quirky character, a libertarian who wants to legalize marijuana and is opposed to a border fence to stop illegal immigration. But he has attracted a passionate if tiny following while mostly flying below the media’s radar.

Kurtz speculates that Johnson’s inclusion may “help the top two candidates, Rick Perry and Mitt Romney, by diluting the airtime available to the other contenders”; however, it’s also possible that Johnson will provide a more mainstream libertarian counterpart (at least in messaging, if not substance) to Ron Paul’s quirky mix of economic laissez-faire and social Darwinism, not to mention an alternative to the other, mostly social conservative, dwarves sharing the stage.

If nothing else, Republicans are likely to benefit from having another candidate with serious political credentials cutting into the airtime of pizza empresario Herman Cain.