Is Herman Cain for real, or is this rise int he polls just another boomlet destined to fade away? 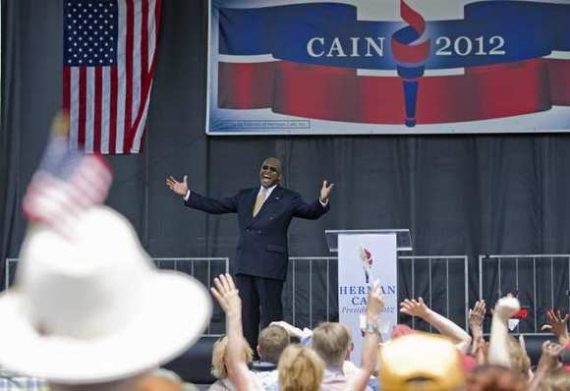 Two more national polls are confirming the fall, at least for the time being, of Rick Perry and the improbably rise of a candidate many had thought had faded away months ago. First, a new poll from CBS News and The New York Times, shows Georgia businessman Herman Cain rising into top tier status:

Herman Cain has moved into a tie with Mitt Romney atop the field of Republican presidential candidates, according to a new CBS News poll, while Rick Perry has fallen 11 percentage points in just two weeks.

The poll shows Cain, who stood at just five percent support two weeks ago, now holding 17 percent support among Republican primary voters. That puts the former Godfather’s Pizza CEO into a tie with Romney, the former Massachusetts governor, whose support has essentially held steady over the past two weeks.

Perry, meanwhile, has dropped from 23 percent support to just 12 percent support over the past two weeks, a sign that the Texas governor’s shaky debate performances – in which he has alienated portions of both the Republican base and the party establishment – have taken their toll.

Here are the full results:

In the new Quinnipiac Poll, the numbers are somewhat identical:

PPP polled Republican primary voters in three pretty different states over the weekend- North Carolina, Nebraska, and West Virginia- and found Cain leading the way in each of them as Newt Gingrich surged, Mitt Romney stayed steady, and Rick Perry saw a collapse in his support.

The reasons for Perry’s fall are pretty apparent at this point, and the poll results tend to reflect them. In the CBS Polls, for example, only one in ten Republicans surveyed said they supported Perry’s position on in-state tuition for children of illegal immigrants, 58% said they have watched at least parts of the debates that took place in September, and 80% said that the way the candidates performed in the debates were at least somewhat important to them. Add all of that up, factor in three fairly disappointing debates for Perry and it’s not at all difficult to figure out what happened to him. The fortunate thing for him is that to the extent his fall is due to how he performed in the debates, that’s something that’s fixable if Perry manages to turn things around over the next several months.

What to make of Herman Cain, though?

We’ve been here before, actually. When Cain first entered the race, and after he did pretty well at the first Republican debate on Fox, he started to rise in the polls to the point where he was in second place behind Mitt Romney in many national polls in early June. That didn’t last very long, though, and in part it was due Cain himself. His comment that he wouldn’t hire a Muslim to work in his Administration, or that he thought communities should be able to ban construction of a mosque turned many people off. He also displayed a rather appalling ignorance of foreign policy issues when he showed he was unfamiliar with the Palestinian “Right of Return” debate, and somehow believed that the price of oil had something to do with Iran’s nuclear program. More importantly, though, his campaign proved completely unable to capitalize on that early surge in the polls, and he quickly fell to the middle of the pack as Michele Bachmann started to rise.

But what about this time? Is Herman Cain for real, or is he just a placeholder for people who have become disillusioned with Rick Perry but would be ready to jump back to him if they’re fears are allayed?

Based on what we see, there’s very little reason to believe that Herman Cain’s journey into the top tier of the GOP race is anything permanent. In the fundraising quarter that ended on June 30th, Cain raised an anemic $2.46 million, about the same as Jon Huntsman had raised from outside donor  in only two weeks. The campaign has yet to release its third quarter numbers, but there’s no reason to believe that he did all that much better and no reason to believe he raised anything close to what Rick Perry and Mitt Romney will have brought in for that three month period.

While money isn’t everything, as Rudy Giuliani can attest, it does help build an actual campaign organization, which is something that Cain seems to be lacking at the moment. His shoestring operations in Iowa and New Hampshire were decimated earlier this year by staff resignations. Based on his 5th place appearance in the Ames Straw Poll, it doesn’t appear that he’s rebuilt that organization at all. Just this weekend, his national Communications Director and her deputy resigned for reasons that still haven’t been fully explained. And what his Herman Cain doing right now? Is he capitalizing on his rise in the polls? No, he’s going on a book tour:

It’s momentum and recognition that the Rick Santorums and Jon Huntsmans of the GOP world must be lusting after.

But Cain seems destined to squander it. And here’s why.

As NBC’s thoughtful First Read points out this morning, Cain’s promoting a book – and appears to be taking himself off the campaign trail for almost a month.

Cain won’t be back in the key state of Iowa until November. With all of the jiggering of the Republican primary calendar, that means he’ll have six weeks (at best) to pound the trail before the Iowa caucuses in early January.

Herman Cain’s campaign isn’t dead by any means. But look at the difference between his campaign and that of Texas Congressman Ron Paul. With Paul rising in the polls, the congressman started cutting aggressive broadcast ads pounding Texas Gov. Rick Perry, among others, and hauling in campaign dollars. Paul’s got two events in New Hampshire today.

When you peel off the campaign trail for four weeks in the heat of the fight, it raises questions about just what the heck a candidate is doing in the race anyway.

This isn’t the stuff of a serious Presidential Campaign. At this point, even if Cain wanted to make the kind of moves necessary to exploit this bump in the polls it’s not even clear that he can. His campaign says that their third quarter fundraising numbers will “be enough to be competitive,” which is political talk for “they won’t really be that great, but we don’t want to say that.” That isn’t hurting Cain now because he’s running a shoestring campaign, but you cannot win a Presidential nomination on a shoestring.

More importantly, the fact of the matter is that Herman Cain hasn’t really been tested on the national stage yet. His rise in the polls this summer was so brief that there was a barely enough time to be in the focus of the press, or of his opponents. That’s not going to be the case this time. As Jazz Shaw, notes, now is the time when Herman Cain is going to be vetted, and if there’s anything he’s said or done, it’s going to come out. As a guy who had a talk radio show for many years, there’s no doubt something out there that he’s uttered that someone’s going to ask him to explain, for example.

On the policy side, there’s plenty in Cain’s record that conservatives are likely to question when they get to know more about him. He spent much of 2007 and 2008 saying in his various Op-Eds (see here, here, and here) that the economy was just fine. Then, when it started collapsing, he jumped on the TARP bandwagon, a position that is anathema to the Tea Party. Cain’s stance on gun control is, in a word, bizarre in that he essentially seems to think that the Second Amendment shouldn’t apply to the states at all. And his “9-9-9 Plan,” which is being touted by his supporters, is both bad economics and a trojan horse for the kind tax system that would hurt the poor and choke the economy. And, finally, as I’ve noted above his foreign policy positions are little more than simplistic slogans combined with some appallingly bad knowledge about what’s really going on in the world

Whether he’s ready for it or not, the national press and, mostly likely the Perry campaign, are going to be scrutinizing Herman Cain over the next few weeks. I’m betting he won’t be looking so good to the voters after it’s over.

Over at The Volokh Conspiracy, Todd Zywicki makes this observation:

Cain is starting to remind me of Huckabee the last time around-you could tell that many people were enthusiastic about him if he could gain enough of a critical mass that people might actually think of him as something like a viable candidate.  Even though I didn’t like Huckabee’s policies at all, I could appreciate the appeal of his personal warmth and likability for many people.  I don’t know that much about Cain’s policy proposals at this point but my sense is that people are drawn to him personally as well, except that his appeal is in his authenticity and sense of core convictions which is such a contrast from most politicians out there.  I think this personal appeal (although different from Huckabee’s) makes him a better bet to stick around for awhile than was the case with Bachmann who seemed to become less appealing to people the more they saw her.  It is still a definite uphill battle for Herman Cain to win the Republican nomination (and I’m definitely not saying that I am for or against him right now) but I could see him in a constant place or show position throughout the early primary season.

This may well be the case, but there are some crucial differences between Huckabee in 2008 and Herman Cain today. The first and most important, of course, is that Huckabee had a well-organized, well-funded campaign organization and was spending this time in 2007 on the ground in Iowa rather than roaming around the nation on a book tour to states that don’t even have primaries until March or April. Second, Huckabee was drawing from a group of voters, evangelicals, who are always reliable when it comes to doing the kind of grunt work that winning in a place like Iowa requires. Third, even Huckabee wasn’t able to take all of that support and all that charisma and turn it into a win in 2008. I don’t think Cain will be able to do it 2012, either. There’s no doubt he’s an energetic speaker and very charismatic, and both of these will carry him far. It’s not going to be far enough, though.