It’s being widely reported that Bob Gates has agreed to stay on, at least for a time, as Secretary of Defense.   Politico’s Mike Allen fills in the rest of the foreign policy team:

Obama plans to announce a national-security team early next week that includes Gates at the Pentagon and Sen. Hillary Rodham Clinton (D-N.Y.) as secretary of state, officials said.

Retired Marine Gen. James Jones, former Marine commandant and commander of U.S. and NATO forces in Europe, will be named national security adviser, the officials said.  The national security adviser heads the National Security Council, which is the part of the White House structure that deals with foreign policy, and varies in influence from presidency to presidency. Jones insisted on — and got — a commanding role, the sources said.

Democrats familiar with the national-security event early next week said they also expect James Steinberg, who was deputy national security adviser in the Clinton administration, to be named deputy secretary of State; Susan Rice, Obama’s senior foreign policy adviser on the campaign, to be named U.S. ambassador to the United Nations; and retired Adm. Dennis Blair, the former commander-in-chief of the U.S. Pacific Command and a veteran of the NSC, Central Intelligence Agency and Joint Chiefs of Staff, to be named the director of national intelligence.

Tom Donilon, an assistant secretary of state for public affairs and chief of staff at the U.S. Department of State during the Clinton administration, is a leading candidate to be Jones’ deputy at the NSC, officials said.

With the exception of Clinton, all have very impressive foreign affairs credentials and even she brings a high profile and a reputation for being a workhorse.

Rice has to be somewhat disappointed.   She’s only a year older than I am, so UN Ambassador is a perfectly prestigious post.  Still, her (no relation) namesake, Condoleeza Rice, held the same position in Bush’s campaign and wound up as National Security Advisor.  Ditto Anthony Lake, who advised Bill Clinton during the 1992 campaign.   She has served in senior positions on both the NSC and at State, so she’s certainly qualified.

UPDATE: An amusing result of Obama’s appointing people to his right to all three top foreign policy positions is that Max Boot is thrilled and Chris Bowers is bummed. 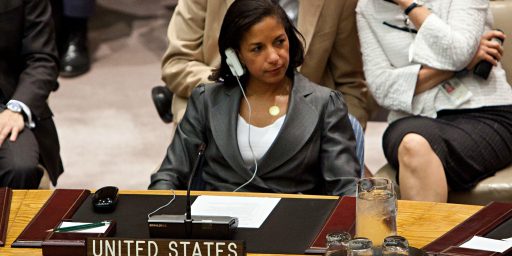