The Dallas Cowboys have won their 10th game and guaranteed themselves a trip to the playoffs–doubling their win total from each of the previous three seasons–beating the New York Giants for the second time this season. Coach Bill Parcells also got a large container of Gatorade dumped on him by his players, a tradition started, ironically enough, by the Giants when Parcells was their coach in the 1980s. 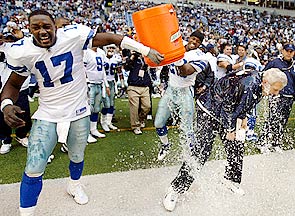