Jeff Harrell points to the an image from Apple Computers’ new ad campaign: He and I have the same immediate reaction: Two gay guys holding hands. He reads some age issues into it that wouldn’t otherwise have occured to me. His friend in the advertising industry thinks he’s reading too much into it.

I don’t much care, in that I’m not in the market for a new computer, let alone a Mac. I do, however, wonder why advertisers would employ gay themes when designing ads not specifically targetted to gay audiences.

For example, I subscribe to and read GQ and Esquire. I’m sure that they have some substantial gay and “metrosexual” readership but would presume that the vast majority consists of straight men. So why is Dolce&Gabbana placing ads like this?

Granting that the designers are themselves openly homosexual, why would they want to create that association with their brand? Wouldn’t “these clothes will make you attractive” (to which one could naturally fill in “hot chicks” or “other guys”) be a more effective marketing strategy than, well, whatever the hell their marketing strategy is?

LaMont Jones of the Pittsburgh Post-Gazette suggests that this is just the natural evolution of the “sex sells” philosophy of advertising.

Then there is the homoeroticism of Dolce & Gabbana four-page ad series in recent issues of popular men’s magazine GQ. In February, men in suits stare at an apparently naked man lying on the floor while a fellow nearby fiddles with his pants zipper. In the March series, the clothes fade into the background as men pose bare-chested, pants down, hands inside underwear, hands on the crotch.

These images are bolder than similar but more subtle homoerotic images of female models in ads by Emporio Armani, BCBG Max Azria and Gucci. And they’re being noticed and talked about.

“Not even Freud could decipher this hallucination,” blogger David K. wrote about some of the Dolce & Gabbana ads, which he posted on nightcharm.com. Commenting on the image featuring the apparently nude guy, the blogger asked: “Is this what male fashion has come to?”

Evan J. Schapiro, a GQ spokesperson, acknowledged that the ads are “very provocative.” Supporters “appreciate the artistic value” while some criticized the ads as “over the line.” “We take notice of all the ads that appear in our magazine. In this particular instance, we decided that our readers could come to their own conclusions. We have received both positive and negative responses via mail from our readers. Advertisers advertise in GQ because we have a vocal and loyal readership.”

The difference between these and other sexually provocative ads, though, is that they do not seem to align with the sexual fantasies of the target audience. While the association of silicone-enhanced, scantily clad women and beer is exploitative, the implied message (“Chicks dig guys who drink Miller Lite!”) is at least one whose appeal is nearly universal to the target demographic. “Wanna see my bulge?” Not so much.

Update: Joe, who describes himself as “a gay New Yorker living in the rural south,” has a thoughtful response to this post. He notes, as many have, that the Apple ad is not gay themed when viewed in its entirety. I would agree; I was reacting only to the still image from Harrell’s post.

As to the G&B ads, Joe responds, “these ads do not represent me or my lifestyle and do a disservice to gay people [emphasis his].” 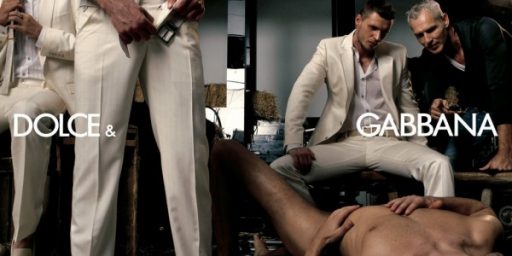 Should We Boycott Moron Clothing Designers?