Georgia Crisis: Who Started It?

Michael Totten has a detailed post on the ongoing crisis in Georgia pushing back against the conventional wisdom: Virtually everyone believes Georgian President Mikheil Saakashvili foolishly provoked a Russian invasion on August 7, 2008, when he sent troops into the breakaway district of South Ossetia. “The warfare began Aug. 7 when Georgia launched a barrage targeting South Ossetia,” the Associated Press reported over the weekend in typical fashion.

Virtually everyone is wrong. Georgia didn’t start it on August 7, nor on any other date. The South Ossetian militia started it on August 6 when its fighters fired on Georgian peacekeepers and Georgian villages with weapons banned by the agreement hammered out between the two sides in 1994. At the same time, the Russian military sent its invasion force bearing down on Georgia from the north side of the Caucasus Mountains on the Russian side of the border through the Roki tunnel and into Georgia. This happened before Saakashvili sent additional troops to South Ossetia and allegedly started the war.

I agree with this analysis insofar as it goes.  I’d quickly add, however, a major caveat:  Any search for blame in this matter that starts in the summer of 2008 — or, indeed, this century — is bound to fail. There’s been plenty of action and reaction going on for generations to pin the responsibility on any one person or event.

The signage pictured above, taken from Totten’s post, captures that fact rather nicely.  It’s also, shrewdly, in English and therefore aimed at an external audience.

UPDATE:  Joshua Foust has a detailed rebuttal to Totten’s post and, in particular, his reliance for much of the part of that post I didn’t excerpt on a paid advocate for the Saakasvili government.  More generally, though, he amplifies the subtext of my brief commentary above:  Most observers of this conflict simply have too little knowledge of the backstory to provide insightful commentary. 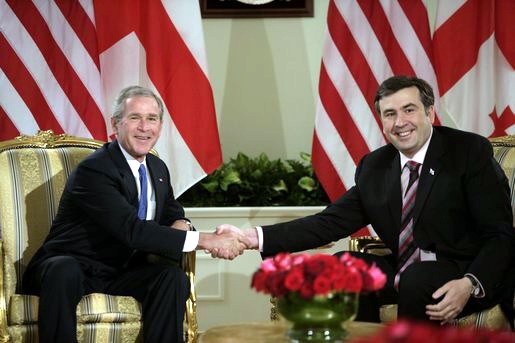