Vice-President Pence is advocating the admission of Georgia into NATO. That would be a bad idea. 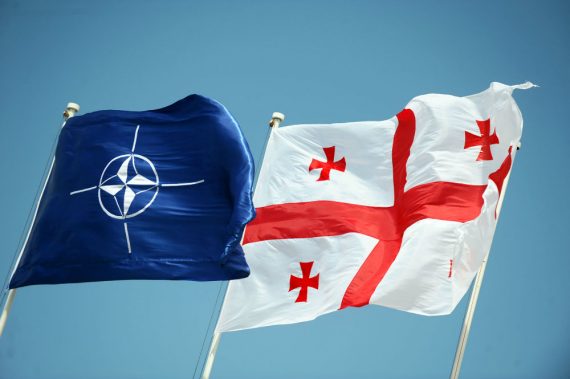 Speaking yesterday during a visit to Tibisi, Vice-President Pence endorsed the idea of bringing the nation of Georgia into the NATO alliance:

Russia and Georgia fought a brief war in 2008, which lead to two breakaway Georgian regions, South Ossetia and Abkhazia, declaring independence. Russia has since been supporting the regions both financially and militarily.

The U.S. “strongly condemns Russia’s occupation on Georgian soil,” Pence said Tuesday at a joint news conference with the Georgian prime minister in Tbilisi, the Georgian capital. “We will reject any claim at any time by any nation that undermines this enduring principle.”

The visit comes a day after Pence met with the presidents of three NATO countries — Estonia, Latvia and Lithuania — in the Estonian capital of Tallinn and pledged that “an attack on one of us is an attack on us all.”

The visit comes a day after Pence met with the presidents of three NATO countries — Estonia, Latvia and Lithuania — in the Estonian capital of Tallinn and pledged that “an attack on one of us is an attack on us all.”

Georgia and the three Baltic nations were all occupied for nearly five decades by Soviet troops before regaining their independence in 1991 after the collapse of the Soviet Union.

The idea of admitting Georgia, a nation that lies in the Caucus Mountains region and shares borders with Turkey, Armenia, Azerbaijan and, along its longest frontier, Russia, to NATO is one that has been around for quite some time. Shortly after the nation gained independence from the former Soviet Union, it joined both the NATO-run North Atlantic Cooperation Council and the Partnership for Peace, two organizations that included many of the former Warsaw Pact nations as well as nations that had once been part of the Soviet Union. Later in the 1990s, the nation entered a formal Status of Forces Agreement with NATO and established formal diplomatic relations with the Alliance. Joint military exercises began in 2001 and 2002 and, after the Rose Revolution in 2003 that overthrew the government of former Soviet Foreign Minister Eduard Shevardnadze, the nation cooperated with NATO efforts in Afghanistan in response to the September 11th attacks. In 2005, the nation began the process of seeking to become a full member of NATO, an effort that culminated in 2008 with a non-binding referendum in 2008 in which 77% of those who came to the polls voted in favor of seeking membership in the NATO alliance. Despite these entreaties, NATO members have been reluctant to endorse the idea of Georgian membership, and the application process appears to be stalled at this point in time. (Source)

It wasn’t very long after that referendum that Georgia and Russia got into a confrontation that was rooted in bids for independence from South Ossetia and Abkhazia, two regions of Georgia that have historically close ties to Russia. Both regions sought to return to Russian control and resisted efforts from the rest of the nation to develop closer ties to NATO and the European Union. The Russians invaded Georgia in August 2008 and quickly overran the vastly inferior Georgian military, inflicting serious casualties on military and civilians alike in the process. By the time the war was over, Russia had its forces in South Ossetia and Abkhazia firmly entrenched, and those regions remain occupied by Russian troops to this date. (Source) The invasion occurred in the context of the beginning of the 2008 Presidential campaign and led to many Republicans calling on the United States and NATO to respond to the Russian attack. The most absurd of these came from Republican nominee John McCain who proclaimed at one point “We are all Georgians,” a comment that prompted a vigorous response from many quarters who disagreed with the idea that a crisis on Russia’s border and a dispute that had bad actors on both sides should lead to the United States taking sides at all. In the nine years that have followed the war, there’s been no real progress on the idea of Georgia joining NATO. Each time the issue has come up, the alliance has blocked the idea and the consensus at this point seems to be that NATO membership for the nation is something that is off the table for the time being, especially with the extent to which Russia has become more aggressive about defending its borders. Now, the Vice-President of the United States appears to be indicating that the Trump Administration wishes to reopen this can of worms.

The people in the West advocating membership in NATO for Georgia appear to be largely the same group of people who are also advocating NATO membership for Ukraine, specifically including what remains of the neoconservatives that once had a home in the Administration of President George W. Bush. As with Ukraine, their primary motivation seems to be the idea that admitting Georgia as a NATO member would be a rebuke to Russia in general and to Russian President Vladimir Putin in particular, who has long been riling up the Russian masses with talk about ‘escalation’ by NATO as the alliance expanded to included all of the former members of former Warsaw Pact except Russia, and most especially the Baltic states of Latvia, Lithuania, and Estonia, the only NATO members that used to be part of the U.S.S.R. itself. Playing mostly on old Russian fears of being encircled by its adversaries, Putin has portrayed NATO’s expansion as a threat to Russia’s territorial integrity and an assault on areas that have traditionally been considered within Russia’s sphere of influence. As with the recent admission of Montenegro into the alliance, though, these advocates have been rather unclear about what benefit bringing Georgia (or Ukraine for that matter) into the alliance would bring for its other members. At the very least, it seems to me that the advocates for membership should have to meet this burden before any discussion about membership should be allowed to advance.

On paper at least, it doesn’t seem to me that Georgia’s admission would add anything to the alliance that it doesn’t already have. At roughly 3.7 million people, Georgia’s population would make it one of the smallest members of NATO, and its relatively small amount of military personnel, standing around 37,000 (source), means that its ability to actually contribute to NATO in a meaningful way would be extremely limited at best. In the meantime, admitting the nation would mean that every other member would be bound to come to its defense should the war over South Ossetia and Abkhazia, or any other conflict, flare up again in the future. Given its location, getting resources to Georgia in the event of such a crisis in the middle of a crisis would be difficult at best, and could prove futile given the ease with which another Russian invasion would have in overrunning the country as it did in 2008. To be completely frank about it, it’s questionable at best whether some of the members of NATO would be willing to send their forces to die to such a remote location for a nation that has a tenuous connection at best to NATO’s primary mission of securing peace in Europe and the North Atlantic. Indeed, there are some who debate whether or not Georgia should even be considered part of Europe. Finally, admission of Georgia would inevitably lead to questions about the admission of other nations in the region such as Armenia and Azerbaijan, which have had their own territorial disputes with Russia and other neighboring nations. While both those nations have resisted the idea of NATO membership in the past, expansion of the alliance could lead to a change in opinion and increased pressure on the alliance to expand even further East and to make it seem as though Russian fears about being encircled are coming true.

Taking all of this into account, Georgian membership seems to be as foolish an idea as it was in 2008. Such a move would not add anything to NATO itself and risks needlessly provoking Russia in a region that has traditionally been a part of its sphere of influence. Pence’s call for membership is foolish nonsense that hopefully will not actually come to pass.