How many more electoral cycles will we have to endure this ritual? 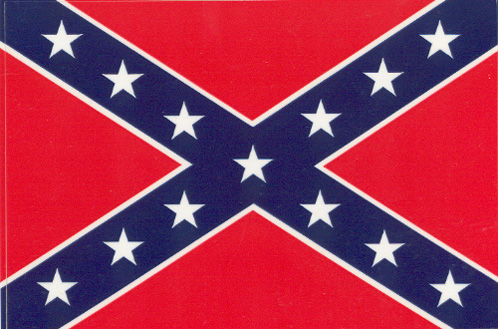 At an event in South Carolina yesterday, Newt Gingrich was asked by a town hall participant to offer his views regarding the state’s decision to fly the Confederate flag at the statehouse in Columbia. The woman’s question was met with a smattering of boos from the audience.

“I have a very strong opinion,” Gingrich said, prefacing his weak response. “It’s up to the people of South Carolina.”

This is an issue that I have grown increasingly impatient about over the years.  Recognizing that, legally, the ability to fly said flag is in the hands of the SC government, that does not mean that it is the right thing to do or that candidates for office ought to pander on the issue.  In other words, Gingrich is right:  it is ultimately a decision and a fight for South Carolinians.  That fact, however, does not mean that he is not allowed to have a position on the subject.

The flag in question, the confederate battle flag, was/is flown for the following five reasons:

1.  A banner flown on the battle field in the cause of rebellion against the United States government and the US Constitution.

2.  A banner flown in support of maintaining slavery.

3.  A banner raised in the 1950s as a signal of opposition to desegregation (and as a sign of resistance to federal attempts at ending segregation).

4.  A banner flown as a symbol of contemporary neoconfederate ideas.

5.  A banner flown as a vague expression of “southern pride/heritage.”

Of the the five listed, only the fifth is even vaguely defensible (and I include it because there are a lot of people in southeast profess it).   It is only “vaguely” defensible because of the five listed, it is the only one with an acceptable motive.  However, as Ta-Neishi Coates wrote back in 2009:

But if the flag’s defenders aren’t racist (which I can accept) the necessary conclusion, while banal and common, isn’t anymore comforting–a shocking ignorance of one’s own history.

In terms of the confederate flag, the people claiming “not a racist” are the same people who name their parks, roads, and squares after generals who served in an army of white supremacy. Or they are  the same people who remain willfully ignorant that this is being done in their name.

A parting thought, number five is part of the ongoing personality disorder of the modern south, where the city of Montgomery can have the following seal: In regards to South Carolina: there is something profoundly wrong with the SC GOP that every four years some Republican candidate (if not candidates) feel the need to pander on this subject.