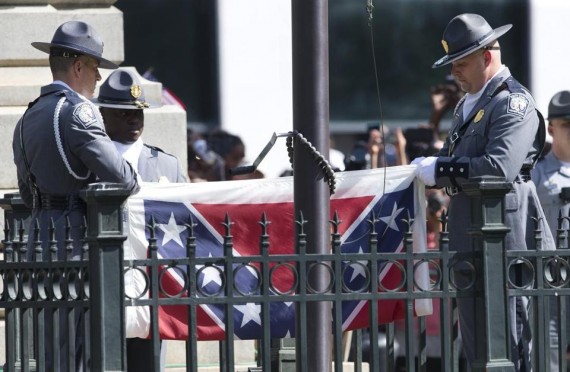 While a crowd that numbered in the thousands cheered and waived American flags, the Confederate Battle Flag was lowered for the the final time after flying on the grounds of the South Carolina State Capitol for the past fifty-four years:

COLUMBIA, S.C. — Closing a chapter on a symbol of the Deep South and its history of resistance and racial animus, South Carolina on Friday lowered the Confederate battle flag from outside its State House, where it had flown for more than 50 years.

The flag came down amid heavy security and loud cheers at a Friday morning event that followed days of emotional debate in the State Legislature and, on Thursday, the final appproval of Gov. Nikki R. Haley, who had pledged that the symbol would be lowered “with dignity.”

Shielded across the decades by both Democrats and Republicans, the flag left its pole outside the State House only 23 days after nine black churchgoers were killed at Charleston’s Emanuel African Methodist Episcopal Church.

The flag, which flew above the State House before it was moved in 2000 to a spot next to the Confederate Soldier Monument, had long been a subject of deep disagreements and public protests. But it was the June 17 massacre at the church, which the authorities have described as a hate crime, that provoked Ms. Haley and scores of other elected officials in both parties to demand the battle flag’s removal.

The flag will be housed at the Confederate Relic Room and Military Museum, a state-supported museum near the Capitol, and its pole will be removed from the grounds of the State House.

“This is a high moment for South Carolina,” said Jack Bass, an emeritus professor of social sciences and humanities at the College of Charleston. “It’s significant. It could be a turning point.”

Scores of people gathered Friday morning near the flag, which the authorities barricaded on Thursday afternoon. Some stood with signs or shirts opposing the flag. Some waited through the morning heat in lawn chairs they brought from home.

“I thought about all of the African-Americans that lost their lives because of the flag, because of the hatred that this flag symbolizes,” said Theresa Burgess, a 48-year-old kindergarten teacher from Florence County who arrived at the State House a little after 6 a.m. “I knew that a lot of Americans would have loved to be here today.”

Ms. Burgess, a native of South Carolina, said the flag’s removal would bring an end to “decades of racism, decades of what this flag symbolizes.”

“I am overwhelmed,” she said as she sat the base of a statue of Ben Tillman, a South Carolina governor and a white supremacist. “I am overjoyed. I almost can’t even talk about it without becoming emotional.”

The removal of the symbol could have long-term practical impact. South Carolina has worked hard to lure multinational corporations to fuel job growth in recent years, and Mr. Bass and others believe that the state could have an easier time with that task now that the flag – revered by many white Southerners, but reviled by African Americans and many others around the world as a vestige of a cruel and backward era – is down.

The removal of the flag had been a longstanding goal among liberals here. But Mr. Bass and many other students of the state’s past and present said it was far from clear if this rare liberal win in a state thoroughly dominated by conservative Republicans will result in other policy changes sought by liberals and Civil Rights activists, such as an expansion of Medicaid under President Obama’s health plan, which could provide health coverage to thousands of residents. Ms. Haley, a Republican and staunch fiscal conservative, has opposed the idea.

Regardless, the battle flag’s rapid removal represents, by any measure, a stunningly swift turning point for a drama that has engulfed the state for decades.

The flag was originally raised above the capitol dome in the early 1960s at the height of anti-integration sentiment in the white South. It was moved in 2000 to a spot next to the Confederate Soldier Monument after an impassioned period of protest, and continued to be one of the most divisive issues in the state.

It was the outrage over the shootings at the Emanuel A.M.E. Church — cutting across racial lines — and the widespread admiration for the families of the victims, who stunned many by publicly forgiving the suspect, Dylann Roof, that opened the door to change. Goveror Haley, who had previously supported the flag, shifted position, and a bill calling for the flag’s removal sailed through the State Senate.

The State describes the scene from Columbia:

The Confederate battle flag is gone from the South Carolina State House.

The white-bordered, square banner bearing the St. Andrews cross was lowered for the last time Friday in front of the Confederate Soldier Monument by an honor guard of seven S.C. Highway Patrol officers.

They folded and rolled up the four-foot flag. Troopers walked to the north steps and handed the flag handed to Allen Roberson, director of the Confederate Relic Room and Military Museum, where the banner will eventually go on display.

The flag was driven to the museum by police escort a mile west on Gervais Street from the State House.

Later Friday, State House crews will remove the last visible remains of the flag. The 30-foot flagpole and decorative black iron fence will be taken down at 2 p.m.

The seven-minute flag-removal ceremony drew thousands of onlookers who filled sidewalks and lawns on the north side of the State House and spilled into Gervais Street.

Some in the crowd chanted shortly before the event, “Take it down.” Cheers rose when the troopers started to make their way to the flagpole along the lawn that separates the north stairs and the solider monument.

The Confederate battle flag had flown at the Capitol for more the five decades after being raised to honor the 100-year anniversary of the Civil War, which started at Fort Sumter in Charleston.

The flag remained atop the State House dome under the United States and South Carolina flags as the South wrestled against federal civil rights measures.

Some South Carolina state lawmakers and activists spent years trying to remove the flag from South Carolina’s most prominent building.

They won a compromise in 2000 when the Confederate flag was taken off the dome and a battle banner was raised at the solider monument along Gervais Street.

The flag was removed for good after the shooting deaths of nine African-American churchgoers at Charleston’s Emanuel AME Church last month.

The tragedy that shocked the nation prompted Haley to call for the flag’s banishment.

State lawmakers joined her. They voted this week to banish the banner despite objections from some legislators who argued the flag and other symbols of the Confederacy did not represent that hate demonstrated by the accused shooter.

The influence of the Charleston tragedy was evident during the Confederate flag ceremony Friday.

Haley and the former governors were joined by Charleston Mayor Joe Riley and Rev. Norvel Goff — who has taken over at Emanuel after its pastor, state Sen. Clementa Pinckney, perished in the shootings on June 17.

The same state Highway Patrol color guard that took down the flag escorted Pinckney’s casket to lay at rest inside the State House last month.

State Rep. Gary Clary, a retired Circuit Court judge from Pickens and freshman Republican lawmaker who was among the first legislators to call for the flag to come down in the wake of the shooting, brought his 13-year-old grandson Conner Pederson to witness the momentous day.

“It was just incredible to be able to witness history because that’s something that’s going to last a lifetime,” Pederson said.

Obviously, this is something that should have happened a long time ago, indeed one can say that the Confederate flag never should have gone on the grounds of the South Carolina Capitol to begin with, especially since the main motivation for its revival in the 1950s was as a rallying point for the defenders of Jim Crow. It’s also tragic that it took the deaths of nine people in a church at the hands of a racist terrorist to bring this day about. Nonetheless, it is good that the day has come and Governor Haley and the other politicians in South Carolina who came together to make this happen in such a quick and decisive manner do deserve some credit for their role in bringing this about. The debate over the measure to bring the flag was heated, especially in the South Carolina House, but in the end it was clear that the vast majority of the state’s political leaders recognized the fact that it was finally time for the Palmetto State to leave behind this symbol, a symbol that is clearly one of hatred rather than prejudice, and acknowledge the fact that their state is not what it used to be. So, even though this should happened much sooner, it’s worth celebrating the fact that it has happened and the fact that it is joined by measure in other states of the Old Confederacy to reexamine the way in which they are continuing to honor the legacy of a nation that isn’t deserving of honor or respect.

One criticism I’ve heard from many people in the weeks since the murders in Charleston is that taking the flag down isn’t going to bring back the nine people who killed and it isn’t going to cure the problem of racial prejudice. While both of these things are true, they are also largely irrelevant. I don’t know anyone who has made the claim that the flag itself was responsible for the murders in Charleston. Obviously, the responsibility for that act lies solely in the hands of Dylann Roof. Furthermore, I am also unaware anyone who is seriously suggesting that taking this flag down and removing other Confederate symbols from government buildings and state flags is going to cure racism in this country. It’s not, and anyone who made that argument would look foolish. However, that doesn’t mean that the flag should not have been removed, or that other symbols, such as Mississippi’s State Flag, should not also be changed, The Confederate Flag carries with it a very specific symbolic history, and it is one rooted in a nation that was founded for the sole purpose of protecting the institution of slavery and encouraging its expansion into new territories. It is a flag that has been used by racist organizations such as the Ku Klux Klan for decades, and it was revived as public symbol in South specifically to resist desegregation and intimidate African-Americans who were seeking the equal rights they are entitled to under the law. For a large segment of the population, it is as offensive as the flag of Nazi Germany and it does not belong in a place of honor on government property. Taking the flag down won’t solve all our problems, but it will reverse the great historical error committed when it was raised aloft to begin with, That may be small thing in some people’s minds, but it’s still important and all Americans should be glad that South Carolina has finally done the right thing.