The people who continue to claim that the Confederate Flag is about anything other than hatred, racism, and a nation that celebrated slavery are lying to you and to themselves. 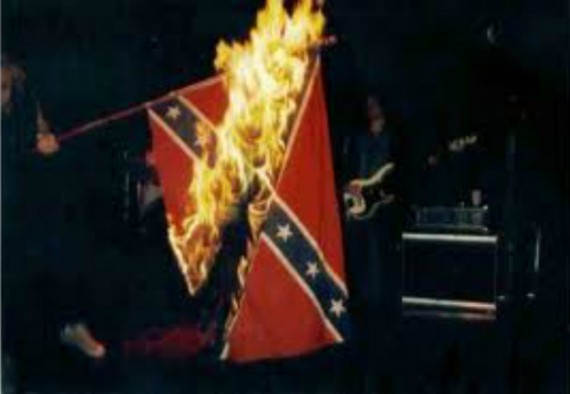 Steven Talyor’s post about a rally in Montgomery, Alabama in support of the Confederate Battle Flag, along with a conversation I got dragged into on social media this morning, led me to this piece by University of Illinois History Professor Bruce Levine, who has closely studied the Civil War and its aftermath, which completely demolishes the idea that the flag has ever been anything other than a symbol of racism and hatred:

In fact, claims like these have little to do with historical reality. The Confederate States of America firmly and emphatically stood for slavery and white supremacy from its birth. Modern-day racists like Roof who brandish Confederate symbols are not distorting their meaning. On the contrary: these racists stand squarely within the Confederate tradition. Pretending otherwise is an obstacle to coming to terms honestly with this country’s history and the enduring strength of the racist views that its symbols celebrate.

In 1861 Confederate president Jefferson Davis reminded his congress that because “the labor of African slaves was and is indispensable” to southern prosperity. “With interests of such overwhelming magnitude imperiled” by the election to the presidency of an antislavery man like Abraham Lincoln, he declared, “the people of the Southern States were driven . . . to the adoption of some course of action to avert the danger with which they were openly menaced.” The Confederacy’s vice president, Alexander Stephens, also acknowledged that disputes about “the proper status of the negro in our form of civilization” between North and South constituted “the immediate cause” of secession. “Our new Government,” he exulted, was founded “upon the great truth that the negro is not equal to the white man; that slavery, subordination to the superior race, is his natural and normal condition.” The new slaveholders’ republic fashioned itself a constitution that reflected secession’s central purpose. In most ways a carbon copy of the U. S. Constitution, the South’s version distinguished itself by guaranteeing that no “law denying or impairing the right of property in negro slaves” would ever be enacted by a Confederate government.

Union victory in the Civil War destroyed slavery. The thirteenth amendment enshrined abolition, and two additional amendments promised black men the same civil rights that white men enjoyed. During the 1870s and afterward, however, champions of white supremacy led a vicious terror campaign that successfully stripped former slaves and their descendants of many of the gains that they had achieved during the war and its immediate aftermath. Leaders of that campaign and upholders of the long-lived segregationist Jim Crow system that terrorism imposed regarded themselves as heirs of the Confederacy. The Sons of Confederate Veterans, for example, boasted more than half a century after Appomattox about the South’s postwar victory in the “great battle for white supremacy and southern ideals.” And as new efforts to overthrow Jim Crow gradually grew in strength during the 1940s, ’50s, and ’60s, segregationists fiercely resisted under the banners of the Confederacy. Various southern states incorporated Confederate insignia into their flags in defiance of that rising civil rights movement.

Dylan Roof and his kind, thus, do not dishonor the memory of the Confederacy; they do not misrepresent and misuse its symbols. The Confederate States of America came into existence to preserve African American slavery and white supremacy. After slavery’s legal abolition, the defenders of white supremacy quite logically looked back upon the slaveholders’ republic as their true forebears. If the country is at last really ready to cease celebrating and honoring the Confederacy and its symbols, it should do so with a full awareness of the long and poisonous traditions that makes this necessary.

Anyone who takes a look a history realizes, of course, that Levine is absolutely correct. Many in the South and others who have an alternative views of history will claim that the Civil War was about something other than slavery, or at least not primarily about slavery, and that other issues such as tariff policy, the economy, political power in Washington, and so-called “states rights.” While all of those issues played a role in the relationship between the North and the South in the years leading up to secession and war, though, it was slavery that drove the dynamic of that relationship and it was the desire to protect the institution of slavery and extend it into new territory that led to the creation of the Confederacy. American political history from the founding until the firing of the first shots in Charleston’s Harbor in 1861 is full of that history, including the Fugitive Slave Act, the Compromise of 1820, the Missouri Compromise, the battles over Kansas between forces for and against slavery, John Brown’s raid in Harper’s Ferry, and the Election of 1860 itself. The secession of South Carolina and the states of the Deep South was not prompted by any overt act by the United States, but by the fact that Abraham Lincoln, who wasn’t even necessarily an abolitionist himself, was elected President. The fact that Lincoln could not have done much of anything to threaten slavery in the South thanks to the fact that Congress, and especially the Senate, was firmly in the control of Southern politicians, was seemingly not sufficient succor to the group of elitists and pro-slavery radicals who pushed the secession movement. What did push the movement, though, was slavery and racism. One need only read the Secession Resolutions themselves, or the words of the man who became the Vice-President of the Confederacy, Alexander Stephens: (emphasis mine)

The historical record is clear as to what the Confederacy was, and to display their banners in anything other than an historical context is to give implicit endorsement to those doctrines the same as if one were to file a Nazi Flag from their window.

As if the history of the Confederacy weren’t enough in and of itself to refuse the hate versus heritage argument, the history of how the flag came to be used in modern times ought to confirm it. In the aftermath of the war, the various flags of the defeated nation largely faded away. Robert E. Lee himself, who after the war became President of what is now Washington & Lee University in Virginia argued that the flag should not be displayed in public and left instructions that no such flags were to be displayed at his funeral or his grave after he died. To the extent the flag was seen, it was in the hands of the Ku Klux Klan and other terrorist organizations that existed in the South n in the years after the war, and the reasons they chose to adopt that banner were obvious to everyone. It wasn’t until the Civil Rights Era that the flag we know today started appearing in public in an official capacity. South Carolina, Alabama, Georgia, Mississippi, and other states across the Old Confederacy adopted the flag by either flying it at state buildings, incorporating it into the state flag, or both as a symbol of resistance to the Federal Government’s efforts to protect the rights of African-Americans and as a symbol to intimidate African-Americans who lived in the South. These states did not start flying the Confederate flag in the 1960s and earlier because of heritage, they were flying it for the same reason that Bull Connor had his officers beating and using water cannons on peaceful protesters, because they wanted to protect and preserve a system of racial repression and discrimination. That is what that flag stands for, nothing more and nothing less.