The October 2014 shooting of 17 year old LaQuan McDonald is beginning to have a political impact in Chicago and could have national political implications as well. 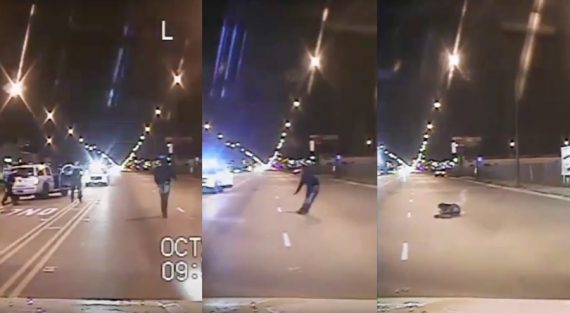 Yesterday, Chicago Mayor Rahm Emanuel dismissed the city’s Police Superintendent in reaction to the controversy that has erupted in the wake of the arrest and indictment of a Chicago Police Officer in the shooting death of 17 year-old Laquan McDonald, but it seems unlikely that this will end the political controversy that has erupted in a case that many allege was swept under the rug as the Mayor faced a tough re-election fight earlier this year:

CHICAGO — A week ago, Mayor Rahm Emanuel and Police Superintendent Garry F. McCarthy stood together, shoulder to shoulder, as this city released long-sought video of a white police officer shooting a black teenager 16 times along a Chicago street last year. But after nights of demonstration that followed the video’s release and growing calls for changes at the city’s Police Department and beyond, Mr. Emanuel stood alone at a lectern on Tuesday to say that he had dismissed Mr. McCarthy.

It was a sudden shift for Mr. Emanuel, who had brought Mr. McCarthy to Chicago more than four years ago and had expressed confidence in his work as recently as last week. And it highlighted the intensifying public and political pressure Mr. Emanuel faces over the shooting of the teenager, Laquan McDonald; the integrity of the department’s handling of his death; and the city’s resistance to releasing the video. The footage became public last week only after a judge’s order.

Facing pointed questions on Tuesday about why the city had not released the video early this year, when Mr. Emanuel was in a heated re-election battle, he said, “We have a practice, not unique to Chicago, that you don’t do anything as it relates to material evidence that would hamper, hinder, compromise an investigation.” He added: “Yet it’s clear you all want and the public deserves that information. There are two conflicting principles.”

Mr. Emanuel, a Democrat who was elected to a second term, also acknowledged that broad change was needed in the Police Department. He announced a task force that he said would take a hard look at accountability, oversight and training at the department. And he said he had to work to build the public’s confidence — both in the police and in himself.

“There are systematic challenges that will require sustained reforms,” Mr. Emanuel told reporters during a tense news conference at City Hall. He said he had dismissed Mr. McCarthy, 56, on Tuesday morning because “at this point and this juncture for the city, given what we’re working on, he has become an issue rather than dealing with the issue, and a distraction.”

“I’m responsible,” Mr. Emanuel said of the need for change at the Police Department. “I don’t shirk that responsibility. I have taken certain steps prior to this date. I’m taking steps today. As I told you, this is a work in progress and finding a solution. It’s not the end of the problem.”

Mr. Emanuel’s problems with black voters and community leaders predate the shooting of Mr. McDonald. He was forced into a runoff election this year in large part because of anger in mostly black and Latino neighborhoods over the decision by his appointed school board in 2013 to close nearly 50 public schools in Chicago. High crime in some of those neighborhoods and longstanding complaints about police brutality also fueled opposition to the mayor. Now, many black residents say they are troubled by the shooting of Mr. McDonald and the treatment of young black people by the police.

Even as Mr. McCarthy’s dismissal was announced, critics of the city’s handling of the McDonald case pushed for more change, and some leaders demanded additional investigations. Lisa Madigan, the state attorney general, called for a Justice Department investigation into the practices of the city’s Police Department, like one conducted in Ferguson, Mo., after a police shooting there.

Some critics called for the resignation of the local prosecutor for waiting 13 months to charge Officer Jason Van Dyke with murder last week in Mr. McDonald’s death. Others said Mr. Emanuel should step down or at least be subject to an outside investigation for his administration’s handling of the case.

“The mayor has to hold himself accountable,” said Ja’Mal Green, an activist and leader of a community group here. “We wanted McCarthy gone, but he’s just the lesser of the devils.” Mr. Green described the superintendent as having to “take the fall” on behalf of a beleaguered mayor.

The Rev. Corey Brooks said some black Chicagoans were concerned about the city’s efforts to keep the video from becoming public as Mr. Emanuel was running for re-election. Mr. Emanuel was re-elected on April 7; the City Council approved a $5 million settlement for the McDonald family on April 15. The settlement included a provision preventing the release of the video until state and federal investigations of the shooting were complete.

Many of the activist and community groups protesting in the wake of the video of McDonald’s shooting last week noted that the settlement with the family came even before the family had formally filed a notice of claim or taken any of the other steps necessary to sue the city in connection with McDonald’s death. While this does some odd on its face, the fact that the family was represented by counsel and apparently involved in negotiation with the city prior to the time the settlement was announced would suggest that the intent to take those steps was quite obviously there and that the settlement came after negotiations between the city and the family designed to avoid the costs associated with going forward. This isn’t necessarily unusual in civil litigation, but the fact that it occurred at a time while the video itself was being withheld from the public and occurred only months after Emanuel had won a closely fought re-election bid against Jesus “Chuy” Garcia, a popular member of the Cook County Board of Commissioners that was forced to a runoff when Emanuel was able to get above 50% of the vote. Many have suggested that the investigation was being delayed so as not to damage Emanuel and other incumbents, and point to the fact that the video was not released until last week as evidence in favor of that argument.

While the possibility of politics getting involved in these considerations should not be dismissed, it’s worth nothing that Emanuel and the State’s Attorney have both said that the video was not released due to the fact that there was an ongoing investigation, and the McDonald family had reportedly taken the position that they didn’t want the video released at all for privacy reasons. These explanations dont’ seem to be sitting well with protesters who are calling for both Emanuel and the State’s Attorney to step aside. That doesn’t seem likely to happen, though, and Illinois does not have a law that would allow for the removal of any elected official other than the Governor. Nonetheless, it seems clear that the fact that Police Officer James van Dyke has been charged with first-degree murder is not going to quell the protests and may just be the beginning of the problems that Emanuel and the police department will have to deal with on top of all the other issues facing the city, including, of course, the ongoing violence that seems to claim lives on a regular basis.

Indeed, while the firing of the Police Superintendent seems to be standard operating procedure, it is also clear that this crisis is far from over and that Emanuel and others in Chicago face a difficult future. The biggest issue, of course, is what could be uncovered if the Federal Government steps in to investigate not just the McDonald shooting, but the manner in which the Chicago Police Department operates in relationship to the minority community in general. Many of the protesters who have spoken out over the week since van Dyke was charged have voiced many of the same complaints about police abuse and discriminatory treatment toward minorities that we’ve heard from people in other large cities across the country, for example. Moreover, the idea that there might be problems with Chicago’s police department and its relationships with minority community probably wouldn’t come as a surprise given a history in that city that stretches back decades to the time of the original Mayor Daley. If nothing else, such an investigation would seem likely to keep the issue of police abuse and overreach in the news for quite some time to come, and that strikes me as a good thing. The death of Laquan McDonald was, obviously, thoroughly unjustifiable, but if it helps get politicians on both sides of the aisle to pay attention to an issue that has been ignored for far too long then perhaps there can be soon good to come out of the tragedy.