Rudy Giuliani is likely to run for the governorship of New York, should there be another sudden vacancy. In the latest twist in New York politics, Rudy Giuliani is eyeing a run for governor in a special election this fall should Gov. Paterson be forced to resign, sources say. A top adviser to the former mayor, who pulled the plug on his presidential bid in January, yesterday dangled the possibility of Giuliani’s running in a special election.

[…]
The Post reported this week that state lawmakers started researching the line of succession after Paterson’s first week in office was spent responding to questions about extramarital affairs and the questionable use of campaign funds. If Paterson resigns before August, a special election would have to be held in November.

New York’s new governor has spent his brief time in office dropping one bombshell announcement after another. He admitted that both he and his wife had affairs during a rough patch in their marriage and that he abused drugs decades ago.

Chances are pretty good that Patterson will survive the scandal and finish out Spitzer’s term. Regardless, the speculation has sparked some amusing insights.

Allah also offers the “friendly advice” that “You’ll have to campaign in more than one county to win.”

Don Surber goes out on a limb with this conjecture: “Might he face Democratic Sen. Hillary Rodham Clinton in November after all?” 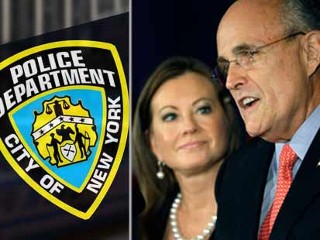