GOING IT. . .ALONE? Daniel Henninger has a powerful WSJ column calling for some Anti-Anti-Americanism:

The last time I recall the streets of Europe teeming with anti-American sentiment was 20 years ago, over the successful installation in Germany of the Pershing missiles, which began the final chapter in the Cold War. That famous spasm of anti-Americanism was not shared in 1983 by the citizens of Estonia, Latvia, Lithuania, Bulgaria, Slovakia, Slovenia, Romania, Albania, Macedonia and Croatia–the formerly unfree nations that today call themselves the Vilnius Group and whose leaders last month signed a statement in support of the American position on the Hussein government. What do they know that Salman Rushdie doesn’t know?

Henninger also gets degree of difficulty points for referencing the late Johnny Paycheck. 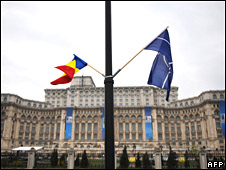