The most outrageous headline I’ve seen in quite some time, at least from a legitimate media outlet, is the one that accompanies this morning’s NYT editorial on yesterday’s verdict in the Hamdan case: “Guilty as Ordered.”

Now that was a real nail-biter. The court designed by the White House and its Congressional enablers to guarantee convictions of high-profile detainees in Guantánamo Bay, Cuba — using evidence obtained by torture and secret evidence as desired — has held its first trial. It produced … a guilty verdict.

The military commission of six senior officers (whose names have not been made public) found Salim Ahmed Hamdan, who worked as one of Osama bin Laden’s drivers until 2001, guilty of one count of providing material support for terrorism.

The rules of justice on Guantánamo are so stacked against defendants that the only surprise was that Mr. Hamdan was actually acquitted on the more serious count of conspiring (it was unclear with whom) to kill Americans during the invasion of Afghanistan after Sept. 11, 2001.

Now, as longtime readers know, I’ve not been a fan of Guantánamo, the lack of minimal due process for those accused of being illegal combatants generally, or the treatment of Hamdan in particular.  Further, I agree with the editorial’s larger point that the way in which Hamdan was convicted taints the process.

That said, the accusation, without the slightest hint of proof or argument, that the jurors violated their oath to judge Hamdan according to the evidence and their conscience, without regard to the wishes of the command, is libelous.  Indeed, the fact that the jury acquitted Hamdan of the most significant charge against him serves as prima facie rebuttal of that charge.

Further, the fact that they found Hamdan guilty of the lesser charge of “providing material support for terrorism” is hardly a demonstration of kowtowing to superiors.   After all, Hamdan did not dispute that he was Osama bin Laden’s driver and bodyguard.  As with the driver of the getaway car in a felony, Hamdan was definitionally guilty once that fact was established.

Rather than besmirch the character of sworn officers doing their duty and producing an honest and courageous verdict, the real target of the Times should have been the process by which the trial took place. Aside from the general litany of issues surrounding Gitmo and the unlawful combatant designation, the fact of the matter is that the crime of “providing material support for terrorism” was established years after Hamdan was in U.S. custody.  He was, therefore, convicted of an ex post facto law.  Indeed, one could argue he was additionally subject to a bill of attainder.

Dave Schuler and I spent the first twenty minutes or so of last night’s episode of OTB Radio (“Hamdan, Cheeks, and Paris Hilton”) discussing the case in particular and the issue of detentions of terrorist suspects in general.  The bottom line here is that there are no easy answers.  Neither of us like this process one bit but we don’t have an alternative process in mind that we’d like much better.  People like Hamdan are in fact dangerous and very much ought be taken out of commission.  They are, however, entitled to some minimal standard of due process to at least establish that they are who they’re claimed to be.  And they shouldn’t be imprisoned for seven years before getting said due process.  Beyond that, though, it’s not entirely clear how these cases should be handled.

UPDATE: This kangaroo court of military officers simply carrying out their orders ignored the prosecutor’s appeal for the maximum penalty of life in prison and sentenced Hamdan to time served plus five months. It just goes to show how clever they are! 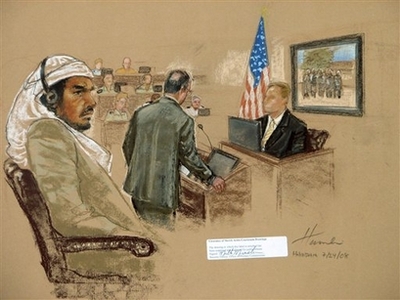