An FCC rule from a bygone era may get Bernie Sanders and company some time on NBC. 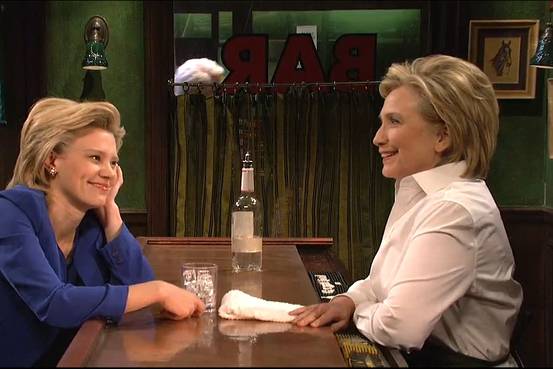 The Democratic presidential contender had a three-minute cameo in the ”SNL” season opener, playing a bartender named Val who comforts a distraught, pretend Hillary sitting at the bar. During her three-minute on air, the former secretary of state poked fun at her delayed support for gay marriage, did a Donald Trump impression and sang before a sympathetic, cheering live audience.

The morning after the show aired, NBC’s head of affiliate relations, Jean Dietze, wrote to affiliate general managers about the sketch, instructing them to file an official notice with the FCC and to alert the network if they receive a demand for equal time from another presidential candidate. Here’s a copy of the notice later filed by WNBC in New York.

The federal equal-time rule applies when a broadcast station gives air time to a candidate for office and the appearance doesn’t fall into one of several exempt categories: a newscast, interview, documentary or a live news event like a political convention. A comedy sketch show like “SNL” doesn’t obviously fall into any one of those groups.

The FCC has never released an official opinion on whether the law applies to shows like “SNL,” but NBC has assumed it does. An NBC spokeswoman told Law Blog that the network regularly sends out such alerts to affiliates when a political candidate shows up on “SNL”,  but said until recently the correspondence wasn’t available online. In 2012 the FCC started requiring affiliate “political files,” which contain the notices, to be posted on the Internet.

The FCC rule lets qualified candidates get comparable air time on the same network in the same time slot. There’s no right to appear on the same show, so candidates couldn’t demand an “SNL” cameo of their own. Cable networks aren’t subject to the rule.

The rule strikes me as simultaneously antiquated and inadequate.

It’s not 1974. A mere seven percent of Americans rely on over-the-air signals for their television viewing. I’ve long since been at the point where I’m scarcely aware of what network shows air on, since I watch everything but live sports via my DVR or via streaming from Netflix or Amazon. The distinction between “broadcast” and cable and satellite has long been obsolete.

To be sure, the four broadcast networks (ABC, NBC, CBS, and Fox) dominate the ratings. Of the top-rated shows for the 2014-15 season, every single one of the top 89 shows were one one of those networks. All of the top 190 were on one of the Big Four or CW. (I’m incredibly atypical in that regard, in that the vast majority of the shows that I record or stream originate from a niche network on either basic or premium cable.) But the requirement for equal time on the broadcast networks isn’t a function of their dominance of the marketplace but rather a requirement imposed because broadcast signals must necessarily be regulated.

At the same time, to the extent it remains a good idea to require equal time for other candidates once one is featured on a program, the venue and time slot certainly matter. ‘SNL’ in particular is a prestige venue and Clinton was featured in the opening sketch, the most coveted segment. To give Bernie Sanders or Jim Webb “equal time” when no one is watching is hardly in the spirit of the rule.