Despite new breakthroughs, an HIV vaccine is still some ways off. But, my, we've come a long way.

There has been another breakthrough in HIV science.

Two potent human antibodies that can stop more than 90 percent of known global HIV strains from infecting human cells in the laboratory have been discovered by scientists lead by a team from the NIH National Institute of Allergy and Infectious Diseases (NIAID) Vaccine Research Center.

The scientists found two naturally occurring, powerful antibodies called VRC01 and VRC02 in an HIV infected individual’s blood using a novel molecular device they developed that hones in on the specific cells that make antibodies against HIV. The device is an HIV protein that the scientists modified so it would react only with antibodies specific to the site where the virus binds to cells it infects.

They found that VRC01 and VRC02 neutralize more HIV strains with greater overall strength than previously known antibodies to the virus.

The researchers also determined the atomic-level structure of VRC01 when it is attaching to HIV.  This has enabled the team to define how the antibody works and to precisely locate where it attaches to the virus. With this knowledge, they have begun to design components of a candidate vaccine that could teach the human immune system to make antibodies similar to VRC01 that might prevent infection by the vast majority of HIV strains worldwide.

While Andrew Sullivan thinks this is great news, he passes along a skeptical note from a “budding scientist” and notes that he himself has “has long been dismissive of the search for a vaccine against HIV.”  Also, current treatment options are enormously expensive, which is troubling in a society where individuals are responsible for paying for their own treatment, usually through employer-provided insurance, in a high unemployment economy with no relief in sight.

Finally, he points us to a scathing piece at Scienceblogs arguing that the medical media simply don’t understand how immunization works.

A big problem with HIV-1 vaccines is, sure you might make great anti-HIV antibodies or anti-HIV cytotoxic T-cells– but they have to be in the right place at the right time. If the anti-HIV CTLs arent hanging out at the site of infection, and HIV gets a foothold, youre still screwed. But putting this antibody AT the site of infection would be the way to go.

But still, no, super awesome antibodies arent a cure for HIV/AIDS.

That’s understandable, of course.   He’s been living with the disease for years and been through a roller coaster of emotions as new treatments are pronounced and proven less than hyped. And he’s lost close friends to AIDS.

The vast majority of H.I.V.-positive people in the world, and a significant minority in America, will not have access to the expensive and effective new drug treatments now available. And many Americans — especially blacks and Latinos — will still die. Nothing I am saying here is meant to deny that fact, or to mitigate its awfulness. But it is also true — and in a way that most people in the middle of this plague privately recognize — that something profound has occurred these last few months. The power of the newest drugs, called protease inhibitors, and the even greater power of those now in the pipeline, is such that a diagnosis of H.I.V. infection is not just different in degree today than, say, five years ago. It is different in kind. It no longer signifies death. It merely signifies illness.

If you had told me back in 1991, when he was diagnosed with AIDS and announced his immediate retirement from basketball, that Earvin “Magic” Johnson would still be with us, I’d have thought you insane.   There was simply no way that a treatment could be found in time.   But yet here he is, almost two decades later, thriving as a businessman, television commentator, and HIV awareness evangelist.

None of us had heard of AIDS before I entered high school.  The first reported case was in June 1981 and it didn’t get its current name until July 1982.   It’s another year before the HIV virus is isolated.  Because of enormous attention to a disease killing so many young people, mostly men, we already had the first useful treatments by 1987.  And the combination therapies were available by 1992.

So, in a decade, we went from never having heard of the disease to thinking it some bizarre plague infecting homosexuals to something like a cure.  That’s simply remarkable.  And we’ve come a long way since 1992.

But, like so many other public policy issues, fantastic achievements have been diminished by over-promising.   We were supposed to have an HIV vaccine by 1995.   Instead, we’re left with an incredibly expensive and intrusive treatment regime that allows those who can afford it to bide their time, seemingly indefinitely, waiting.  And being disappointed. 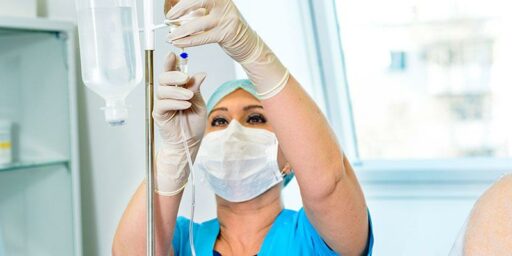