Shepard Fairey, the artist behind the iconic HOPE poster, is disappointed with President Obama. 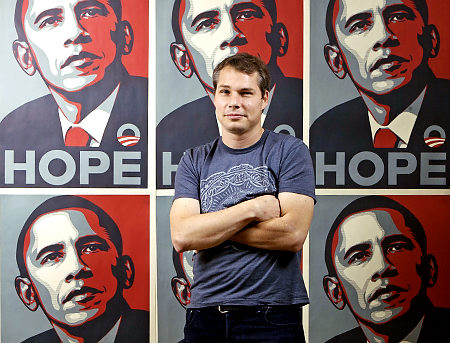 Yet another true believer has had his faith shattered on the brutal shore of reality.  Aamer Madhani:

The artist whose poster of Barack Obama became a rallying image during the hope-and-change election of 2008 says he understands why so many people have lost faith.

In an exclusive interview with National Journal on Thursday, Shepard Fairey expressed his disappointment with the president — a malaise that seems representative of many Democrats who had great expectations for Obama.

Fairey explained that when he came up with the poster in 2008, he was trying to find a single image that embodied the issues he cared most about — promoting health care, helping labor, and curtailing lobbyists. He likened the issues to projectiles.  “Looking at Obama’s standpoint on various policies, it was like, ‘Why throw all these particular projectiles over the wall… when I could put all those things in one projectile that I could hurl over the wall,'” Fairey said in a phone interview from Los Angeles, where he lives. “Obama was the delivery device in theory. Now, I realize that he maybe is not the correct delivery device, and I’ll just deal with those issues separately.”

Fairey’s much-reproduced portrait of Obama — head tilted slightly upward, gazing into the distance, with the word “Hope” emblazoned underneath — captured the imagination of Democrats and unintentionally tweaked Hillary Rodham Clinton, whose husband had been elected as “The Man From Hope.” Hundreds of thousands of posters and stickers with the “Hope” image were distributed to supporters throughout the country. But that was just the beginning. It’s been reproduced countless times on the Internet, and a parody version, with Obama as The Joker and “Socialism” in place of “Hope,” is a favorite at Tea Party rallies.

Maybe it was inevitable that Hope would fade. Fairey’s blue-and-red image was altered from an Associated Press photograph of Obama, and the artist is embroiled in an ongoing lawsuit over use of that picture. (He didn’t discuss the case with National Journal.) Fairey, who at 40 is no kid himself, said it’s easy to see why young voters are down on Obama and the Democrats. He lamented that health care reform was watered down, Tea Party activists have been emboldened, and his man has fallen short on bold campaign promises like closing Guantanamo Bay.

“There’s a lot of stuff completely out of Obama’s control or any of the Democrats’ control,” Fairey allowed. “But I think there’s something a little deeper in terms of the optimism of the younger voter that’s happening. They wanted somebody who was going to fight against the status quo, and I don’t think that Obama has done that.”

To be sure, Fairey still supports Obama, and he says he would use his talents to assist the president’s re-election efforts in 2012. But he said that he couldn’t design the same Hope poster today, because the spirit of the Obama campaign hasn’t carried over to the Obama presidency.

Fairey actually seems more level-headed than your average Progressive blogger on this matter.

Obama was a charismatic candidate who gave good stump speeches and managed to excite even people who would normally have been ideological opponents because he seemed so dynamic and earnest.   But, even aside from having to contend with concerted opposition from Senate Republicans willing to use every trick in the book to block the way, Obama has been a very cautious president.   His soaring rhetoric hasn’t been matched by huge legislative initiatives.   He’s instead gone for a middle way, managing to simultaneously alienate parts of his base, get very little in the way of concessions from the opposition party, and foment a large populist movement to agitate against him. 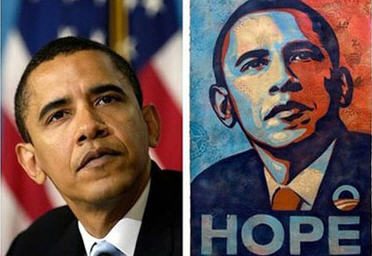 Teaching Prevention is Not ‘Blaming the Victim’